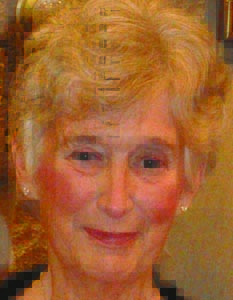 Early this year Cathy Seymour was surprised to receive a call from Rideau Hall.

The Bath resident picked up her receiver and listened to a voice on the other end of the line mention she was calling on behalf of Gov. Gen. Julie Payette.

“The first thought through my head was ‘What did I do wrong now,’ she joked.

Nothing wrong, it turns out. Instead, Seymour is being recognized for doing a lot of things right for her community with the Sovereign’s Medal for Volunteers. Once a year, Canada’s Chancellery of Honours takes nominations, researches and reviews individuals and makes recommendations for the governor general’s consideration.

“I was really shocked when she told me about this award,” Seymour said, adding that she wasn’t even able to find out who nominated her as that information remains confidential.

Though the original plan was to have the award presented by Payette in Ottawa, a recent process change meant it was handed out at a Loyalist Township council meeting Monday evening.

“This is something I have never done or seen in my 20 years on council,” said Mayor Bill Lowry, who called it an honour to represent Payette in presenting the medal. 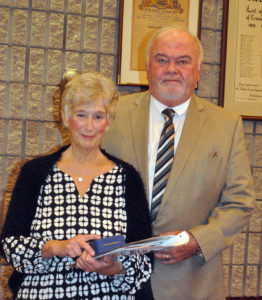 “This medal recognizes the exceptional achievement of volunteers across the country and celebrates a wide range of volunteer accomplishments,” Lowry said. “(Seymour’s) positive contributions to the community have inspired countless others. This is something to be very proud of.”

A retired teacher from the Lennox and Addington Board of Education, who became a special education consultant at the Limestone board, Seymour has a long history of volunteering. She was on the board with the Lennox and Addington branch of the Ontario Society for the Protection of Animals when its shelter was built in Napanee and she served on the Addiction and Mental Health Services board as it redeveloped the Daly Tea Company Building.

Later in life, after a bout with cancer, she became a driver for the Canadian Cancer Society.

“I knew where to go and where to park. I knew the hospital,” she recalled.

Other roles she took on in health care included time spent with Hospice Lennox and Addington in its bereavement support and visiting programs and on the executive committee for Napanee Relay For Life.

Perhaps the location where Seymour’s giving has been felt the most is at Napanee’s St. Mary Magdalene Anglican Church where she has attended for over 50 years. Seymour used to teach Sunday school and she has served as the rector’s deputy warden, the secretary of the parish council and president of the Anglican Women’s League. A lay reader at the church, she has twice been the chair of the diocesan lay readers’ association and also taken part in the diocese’s Synod.

All the involvement, inside the church and out, follows a simple premise.

“I just like helping people,” Seymour said. “I find that really rewarding. To me it’s not a task or a job, it’s just something fun to do. I like to be busy and it keeps me busy.”

Right now, one of her favourite volunteer contributions is working with Seniors Outreach Services and in the Bath community teaching people how to play bridge.

“I love to play bridge and I love teaching people how to play bridge,” It’s so much fun when you finally see the light go on in their eye and they understand it.”

While she’s had to wait some time after learning of the award to get her hands on the medal and share the good news, Seymour said she was thrilled when the moment finally came Monday.

“It was nice to finally get the award and see it. I looked at it online and they sent some information out a while ago when I first got the call. I hadn’t seen it in real life. It’s quite lovely,” she said.

Seymour said there’s even a special protocol for the occasions when she’s allowed to wear the decoration. A pin did accompany the award and she can show that one off. Monday night, she said her partner shared the news to Facebook and positive accolades have flowed since.

Asked about whether her award might inspire others in the community, Seymour hoped it would and said she’d encourage anyone to make similar use of their time.

“Absolutely. I’ve been blessed in my life and it’s just wonderful to have the opportunity to give back to others. I think that’s really important.”