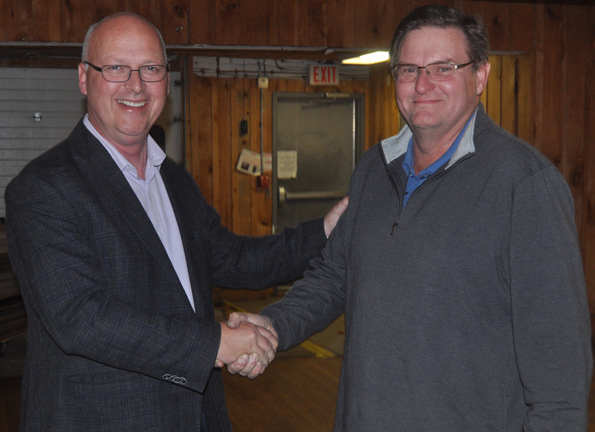 Ric Bresee will be sitting in the mayor’s chair as he begins his sixth term on Loyalist Township council.

The Amherstview native and current deputy mayor staked claim to the municipality’s top job with 55 per cent of the 4,342 votes cast in a three-way race with Lorna Willis and Joy Silver. Bresee had 2,389 votes to Willis’s 1,370. Silver claimed 583. After describing himself as the closest thing to an incumbent with Mayor Bill Lowry’s retirement, Bresee said the result shows confidence in the current council.

“I think people are reasonably happy with the government they have,” he said amid celebrations at the Odessa Farigrounds with his wife, son, and supporters Monday. “There’s a lot of stuff to be done and I want to move forward and get it done. We’ve had a good council for the last two terms and we’re going to have a good council this time.”

He also said he felt voters resonated with the council experience he was able to provide.

“I think it matters and the people know it matters,” he said.

Bresee’s performance in the vote-rich former Ernestown Township in Ward 3 served him well as 1,966 of his 2,389 votes came from there. Willis, an Amherst Islander, actually outpaced him 702-423 in the Bath and Amherst Island counts.

Bresee is one of four returnees on council. He is joined by deputy mayor-elect Jim Hegadorn, a two-term councillor in Ward 3 who defeated Bill McKee handily 2,972 to 1,191 and Ward 3 councillors Ron Gordon and Penny Porter.

Nathan Townend was acclaimed on Amherst Island, taking the seat Duncan Ashley has held since 1998.

The mayor-elect said he heard the message while campaigning that people across the township want to connect with council.

“The biggest thing to me is the engagement side of things. For the longest time, we’ve relied on ‘If the people want to know about council, they’ll come out to council or go on our web site.’ We need to do a better job of bringing information to them where they are so they’ll know what is going on.”

“Something like that would be good to start discussions on and try to set up a schedule to be able to go around and see people.”

He added an early priority will be building cohesion among councillors themselves.

“We’ve got some new players as well as some experience. I think a big part of it to get started is to just make sure that everyone is comfortable and understands their roles to move ahead as a team. We’ve got some good players, but we want to make sure the team is all working together well.”

He said it’s exciting to be selected.

“At times, campaigns are never an easy thing to do. When it’s done and you kind of relax and think about the many people who entrusted you being one of the players — and in a leadership role — it’s humbling and empowering at the same time to make sure I represent them adequately.”

Bresee said after some training to get all councillors up to speed, the first major order of business will be selecting the township’s new chief administrative officer, a key position as it sets the tone for the municipality’s staff.

“It’s very important to get a new CAO that knows how to work with people and get us moving on a steady stream as well.”

The mayor-elect also said the concept of a community hub in Amherstview that would house the municipal offices and upgrade recreation facilities at the W.J. Henderson Recreation Centre is also a topic generating a lot of community interest.

“We’re expecting that report will be coming back very shortly. We have to get it out to the people and get feedback on it to make decisions that way. It’s going to be a massive project,” he said. “If we’re going to go ahead, we need to make sure the finances are right and the energy footprint is right. We need to have space for our staff and we need to repair our pool. There’s a whole bunch of priorities in there. We need to make sure that this is the right direction and, if not, we have to find a different direction to make it work.”

Hegadorn added economic development will be a focus and he’s eager to test some of the ideas business people offered during the campaign to stimulate growth.

Bresee credited his opponents for their efforts in the race.

“Lorna ran an excellent campaign. She was very articulate,” he said. “I really hope they both do stay engaged and come work on some committees and continue to work with us. They have a voice, they need to continue using that voice. I hope they do.”

Will said she enjoyed the experience of campaigning and she plans to remain engaged.

“It was a good showing of voters, so I’m very happy that people came out and voted,” she said. “I’ll continue to support council and go to meetings and ask questions when they need to be asked. I’m very, very grateful for every one of the votes that came my way.”

She said she hopes the elected councillors will embrace greater public engagement as well as some of the commonly heard requests during the campaign, like green bins and splash pads.

“I hope the council will be able to make those things happen because those are the things that were important to them,” she said.

While Willis said she didn’t know whether she’d run again in four years, she said she was not discouraged.

“I had a lot of fun. I met fantastic people. It was all a very pleasant experience. I would do it again and I would encourage other people to do it if they get the opportunity.”