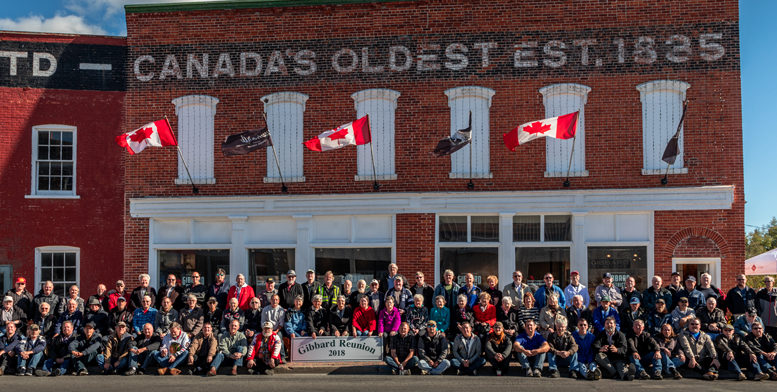 Close to 100 former Gibbard’s employees from several different eras gathered outside the old furniture factory for a group shot as part of a reunion held on Saturday. Photo by Douglas Henderson.

The stories were flowing inside the Gibbard Furniture Shops building on Saturday as some 100 former employees got together to mark the 10th anniversary of its closure.

A wide range of eras were covered, as former employees spanning parts of the last seven decades turned out to catch up and meet with friends they hadn’t seen in years.

The reunion was the brainchild of Dave Peterson, one of the last employees to work inside the building which closed in October 2008.

“We had a picture taken in 2008 and there was 68 people in it,” Peterson recalled of the final days of the factory. “That was when they just started to shut the factory down. I wanted to get everybody in the factory who was still here in the picture, and I did. It’s been 10 years. Instead of just having the 68 (final employees), I opened it up to everybody. There will be people here that are 90 years old. It’ll likely be the last shot we have with the building looking this way it is.”

Peterson says Doornekamp Construction Ltd., who purchased the factory and has plans to turn it into condominiums with 143 units, retail shops and a civic square, was great at allowing them use the old building for their reunion. They opened up the factory and let the former employees walk through the grounds and reminisce and view the spots that would have been their old work stations. They capped the afternoon with a group photo — organized by the Doornekamps — sitting on the original benches they used for their previous staff photos.

A section of Dundas Street in front of the building was briefly blocked off to allow for a group photo of those gathered for the reunion, a throwback to the staff photos that were taken during the factory’s working years.

Those in attendance were given the option of leaving their phone number or e-mail address should they wish to keep in contact.

A common sentiment echoed throughout the day was how late Gibbard president and owner Bruce McPherson had a knack for treating his employees right. That was reflected in the fact that the average Gibbard employee stayed with the company 26.5 years, a number completely unheard of in today’s working environment. Those final 68 employees that helped close the factory down had an estimated 1,400 years of furniture building experience between them.

Several of the employees gathered on Saturday agreed that working there was like being part of a family.

“We had a lot of fun,” said Victor Chant, who worked at Gibbard for 27 years. “It’s generations and generations of employees.”

He said Saturday’s meeting was a great opportunity to catch up with old friends.

“It’s neat to meet everyone again,” he said. “You wonder what they’re doing, where they are and all that good stuff. There’s a lot of good memories here.”

With so many employees working together for long periods of time, Chant says they’d get to know each other and would often get together outside of work, such as playing on the company’s baseball team.

As construction on the new Gibbard District condominiums progresses over the next couple of years, the building will begin less like a furniture factory. While there was a definitely melancholy feeling about that, there was also a sense of merriment knowing the building wouldn’t be torn down completely and would continue to serve a purpose within the town.

Its life as a factory may have run its course, gatherings like Saturday’s are a way to make sure its past isn’t completely forgotten. Design plans for the Gibbard District shows they plan to incorporate at least some of the old building into the facade of the modern-looking layout.

Add that to the fact that the former employees will always be willing to share their memories, the building that played such a huge role in Napanee’s early history will never be completely gone.

“Everybody has stories,” said Peterson. “That’s what will keep the factory alive. It won’t be the building.”