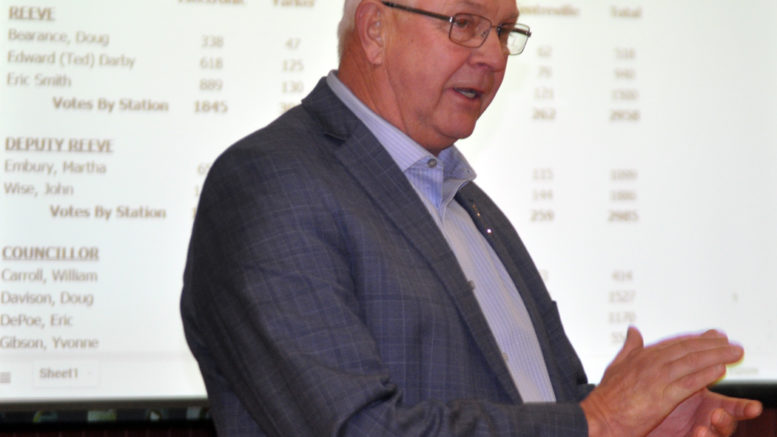 Eric Smith thanks supporters Monday night after being elected as reeve in Stone Mills Township. Smith was appointed to the position in 2016. Photo by Adam Bramburger.

It was a late night in Centreville Monday as the polls were counted for Stone Mills’ municipal election, but when the results trickled out around 11 p.m. voters had sent a clear message — most were content with council.

Six of the seven officials who sat on a council rejigged in 2016 after the death of reeve Clarence Kennedy were returned to their positions by just over 45 per cent of eligible voters in the township. The lone incumbent who will not be back is Martha Embury, who lost the deputy reeve race to incumbent John Wise, 1,886-1,099.

The Tamworth-area farmer was pleased with the validation offered.

“It feels really good. I got into the position partway through and now I know the people wanted me,” he said. “I’m quite proud of what our group’s been doing. We’ve done a really good job — we’ve had challenges and we’ve dealt with them. I’m glad we got the people back that we have. There’s a lot of good ones on there.”

Smith said he’s eager to get back to work Dec. 1 and to stay the course.

“I wanted to express to the people I talked to out there that we can keep going along like we are, keeping the taxes down. We’ve got some good industry in the solar in here and we’re going to work on getting more industry in,” he said. “Just keep moving forward the way we are and I’ll be satisfied by with that.”

Asked about the result, Wise said “I guess you can call it a vote of confidence” in the present council as he said Stone Mills had some hot-button issues in its last term, but felt they were resolved to most people’s satisfaction.

He said he was pleased that Embury offered a challenge, which forced him to get out and campaign.

“I was happy to have the competition to tell you the truth. It got me out maybe ore than I would have. I got to meet some very nice people and some very interesting people. I learned a few things about the township I didn’t know before. A campaign is good for that.”

Wise said the No. 1 issue he heard on the campaign trail was speeding, both on County and township roads.

“We do road improvements and everybody likes that, but when you straighten roads and level out curves people go faster. I heard about that everywhere,” he said.

Communication was another common refrain Wise said the council will have to address.

“We hear about this every election, but we don’t seem to get the message clear enough. We need a Facebook page, maybe, for council. On construction projects, we have to have someone in the roads department contacting everyone that’s going to be affected by a project and not just at the start.”

Wise said he found a “Friends of Stone Mills Township” Facebook page a useful tool on the campaign and said he hopes that sort of communication continues moving forward.

The race for five at-large council seats featured 11 individuals. Doug Davison, who has been involved in municipal politics since 1974, topped the polls with 1,527 votes. Wenda Lalande was second with 1503.  The council’s lone new addition, Shari Milligan, came in with 1,352, placing her 30 votes ahead of incumbent Kevin Richmond. Veteran councillor Deb Thompson took the fifth and final seat with 1,260 votes, a 69-vote margin over Krysta-Lee Woodcock (1,191). Eric DePoe (1,170), Andrew Michalski (808), Deb Storey (767), Yvonne Gibson (554), and William Carroll (414) rounded out the candidates.

Lalande said she felt the full field of candidates “really raised the bar for all of us” and said as a successful member of the new council, she hoped she could build on their ideas and bring some to fruition.

Davison, who called the recent campaign “the most nervous election I ever went through” urged those who weren’t successful to consider another run in the future.

“Please try again. We need people to take the lead on council. What makes the world turn is to have new ideas.”

Thompson also felt the campaign was a hard one to read, but felt thankful with the public’s support for council.

“I guess a clear indication to me was the results show the council of the last four years must have been handling affairs and moving forward. We had the trust of the community to have everyone who was elected back in.”

She said council has to hold the reigns tight on its budget and look for ways to support growth and sustainability.

As candidates took turns speaking to supporters, several paid tribute to Embury. She also stepped forward to thank her family and supporters, while addressing her future.

“I’m really proud because I ran a clean campaign and I played a fair game,” she said. “I’m going to miss being on council, but the great thing about it is I have a lot of things I’ve had to put on hold the past four years of being a municipal councillor. I’ll be able to do those things well and I’ll be able to contribute to my community equally as when I was on council. There’s a few things I’d like to get started in our community and I didn’t have time to do that when I was a councillor.”

Robin Hutcheon was selected as the Limstone District School Board trustee for Stone Mills and Loyalist over incumbent Wess Garrod by a vote of 3,330 to 2,396.