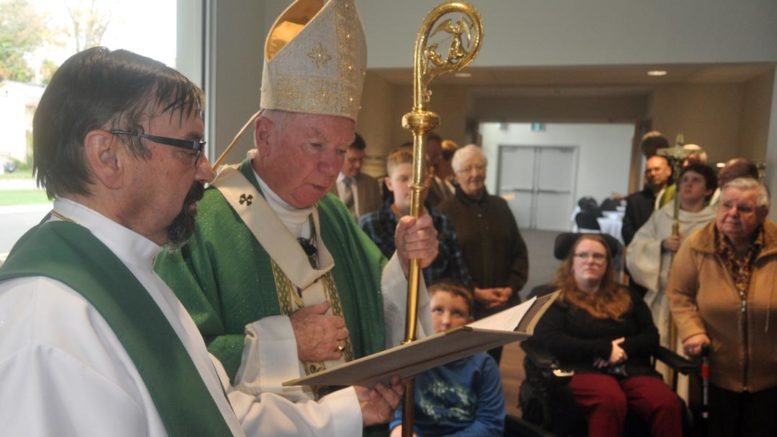 Gathered with parishioners in the new parish centre at St. Patrick’s Roman Catholic Church, Sunday, the Most Rev. Brendan O’Brien, Archbishop of Kingston, reads a blessing over the recently completed addition while assisted by parish priest Rev. Marek Chochrek. Photo by Adam Bramburger.

The afternoon sun glistening upon the stone facade of St. Patrick’s Church provided a welcome backdrop as the Most Rev. Brendan O’Brien offered a blessing for a new 41,000-square-foot parish centre addition.

“After much work and prayer by so many members of our parish, we gather now to bless and dedicate this new parish hall. It will be a centre for parish activities and a place where we may come to know one another and give witness to our faith in Christ,” the archbishop of the Kingston diocese told over 100 parishioners and guests.

The addition has been a dream of the parish for several years as the basement of the rectory next door to the church provides limited space for functions and is not easily accessible for the elderly and parishioners with mobility limitations.

After years of consultation, last year, Rev. Marek Chochrek committed to building a new $1.5-million facility that would allow for meeting areas, new washrooms, a kitchen, and a social area for about 100 people to gather.

Architectural firm Shoalts and Zaback created a design in keeping with parishioners wishes that a new addition not overwhelm the 153-year-old church, and local contractors Wemp & Smith broke ground just after Thanksgiving.

“The architect’s objective was to maintain the integrity of St. Patrick’s Church as the keystone monument and that it is, as you can see,” he said during a celebratory Mass.

“As you walk around the parish centre later on, you will find you have a constant visual of the church and its steeple.”

The parish centre, with white siding, barely touches the stone of the church and features big, full-length picture windows and wide hallways.

Chochrek also described the design as “open, bright, and functional.”

He said the parish was in a position to build because of the commitment of many over the years to build the parish from its transition from a mission in 1865 right up to the present day.

“Without the foresight and fortitude of our ancestors, we absolutely wouldn’t be where we are today. Today, through their hard work, determination and generosity in the pursuit of building a parish for over 150 years, we have a beautiful church,” he said. “For our parishioners, the community, and our friends before us, they did have a great impact on us. Our continuing generosity is still done today and we’re doing our part to move our parish forward, not only for us but for the next generations.”

The pastor said God’s grace and intervention was evident as the process moved from thoughts to talks to an action plan. He expressed gratitude with the work of Shoalts and Zaback and Wemp & Smith.

“Again, we’re blessed to have had the best people working for us. The workmanship throughout this project is second to none. For this, we are eternally grateful.”

Chochrek thanked building committee member John Immerseel, who made the project his own and gave countless hours to the project, and to project foreman Derk Jonkers, who ensured the build matched the vision. Unbeknownst to him initially, Jonkers actually had a family connection to the parish as his father built the rectory.

To receive a ceremonial key to the facility that Wemp & Smith presented to O’Brien, Chochrek selected a group of parishioners from a cross section of different ages. He included young altar servers and ushers who faithfully gave service, a sponsor of a young Confirmation candidate who couldn’t go down the stairs to celebrate, and older Catholic Women’s League members who had asked to see a more accessible space for bazaars in their lifetime.

As parishioners gathered over food prepared in the new kitchen and shared fellowship with one another, with visiting Knights of Columbus guards, or with O’Brien, Chochrek, former pastor Rod McNeil and pastor emeritus Peter Murphy, Immerseel stood in the wide hallway between church and hall with a smile on his face.

“It’s really nice to see the crowd here today. Just seeing their reaction to the building — obviously they like it and they’re looking forward to being able to use it,” he said. “We worked really hard at the front end of this project designing this so that it would fit with the building. We wanted a design that wasn’t going to detract from the church and one that wasn’t going to be obtrusive in terms of how it fit with the church. From that standpoint, we’re pleased.”

“This is reflective of the architect. It was a project that was close to his heart. He loves this building and he really wanted to have a hall that emphasized the historic nature of the church.”

Particular attention was given to building an addition the church could afford and it did come in on budget. Immerseel said the design will also be cost effective in that the outside and interior walls are all insulated, meaning the church will only have to heat or cool the areas it is using.

While the parish had a sizeable reserve set aside for the project, it planned to raise about $300,000 through fundraising efforts. Immerseel said a three-year campaign has been planned, mostly to furnish the centre. He is confident the  targets will be reached.

The first public event in the parish centre will be the Catholic Women’s League’s annual harvest bazaar, which will take place this Saturday from 9 a.m. to noon. Admission for those 6 and over is $3, which includes coffee, tea, and snacks. There will be a bake table, door prizes, silent auction, grocery draws, and more.