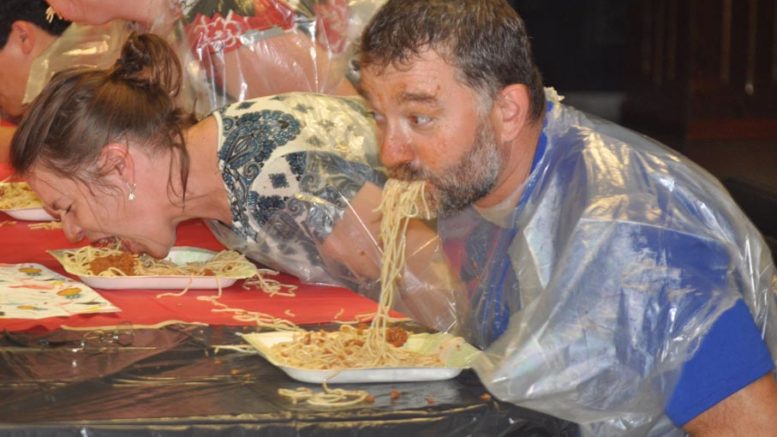 Teachers Shannon Boutilier and Sean Dunleavy dig into their spaghetti during a race with some of their peers, a reward to the Southview student body for exceeding the school’s goal at this fall’s Terry Fox Run. Photo by Adam Bramburger.

There was a jubilant mood in the Southview Public School gymnasium last Thursday as students and staff learned they’d not only met their Terry Fox Run goals, but exceeded them greatly.

After students watched a video showing Fox on his Marathon of Hope in 1980, teacher Sean Dunleavy made the big announcement as members of the school’s Youth Access West (YAW) program unveiled one by one each digit of the total to a roaring applause from their fellow students.

“We tried really hard. Sometimes you try really hard and you don’t get there and maybe you do,” Dunleavy said after telling the students the school had a goal of $3,500 for its Sept. 27 run. The final number read $6,003.20.

“You guys nailed it. This was almost $3,000 above where we wanted to go,” the teacher said.

During the assembly, some of the initiatives that helped raise the bar were unveiled. Paul’s Pizza came through with a pizza party for the class that raised the most money. Four Kindergarten classes each raised more than $500 and the top class raised $670.50 with the top three classes being within $18.50 of one another.

Many students also got behind an individual challenge with the prize being the opportunity to trim librarian Joanne Stewart’s long, flowing blonde hair. Jack Provost was successful in that challenge as he brought in $335 himself, capitalizing on social media to help his cause. 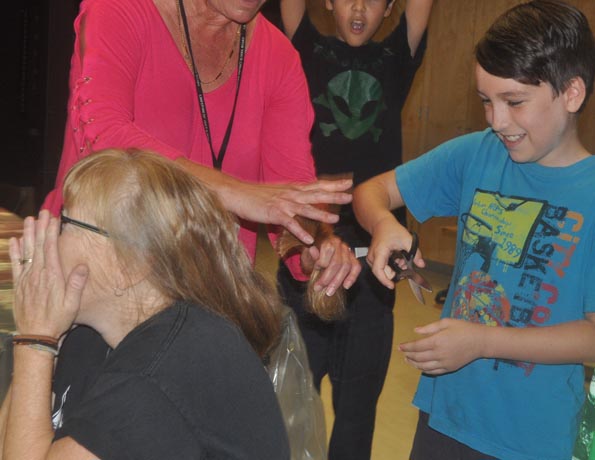 After he snipped her hair and members of the YAW class enjoyed taking turns to give Grade 8 teacher Matt Gallupe a funky new hairdo, the students enjoyed a real treat as six of their teachers chowed down in a hands-free spaghetti eating contest to see who was quickest.

Teacher Shannon Collins said the YAW students were instrumental in this year’s run as they dedicated themselves to helping in support of former resource teacher Marilyn Elliott.

“They really did everything,” she said. Collins noted the students went from room-to-room collecting and counting money. They decided to broadcast advertising on a television screen in the school lobby to gain support and had some great promotions for the run. The students started a campaign that would see a shoe posted on the school’s walls for each student. Instead of participants wearing their “I’m running for” stickers, they also put them on display.

“Instead of putting them on our chests, we put who we were running for up there and we kept them up there instead of having them for one day,” said student Joey Hatfield.

Another idea the class had was to set up signage along the walk route marking the major cities Fox visited on his journey and informing students about how far they were from his starting point in St. John’s, Nfld. and his eventual finish at Thunder Bay, Ont. It educated students and kept them on course in the school yard.

Of course, student Isaac Clayton added, the traditional pledge forms were also part of the campaign.

Students seemed to rally their efforts around people they know battling the disease, like Elliott or student Camden Arthur, who recently travelled to Boston for radiation therapy.

Clayton is hopeful Southview’s efforts to exceed its goals could help pave the way to an eventual cure.

“It’s very exciting. It could make a bunch of lives better and prevent more deaths from happening from cancer.”