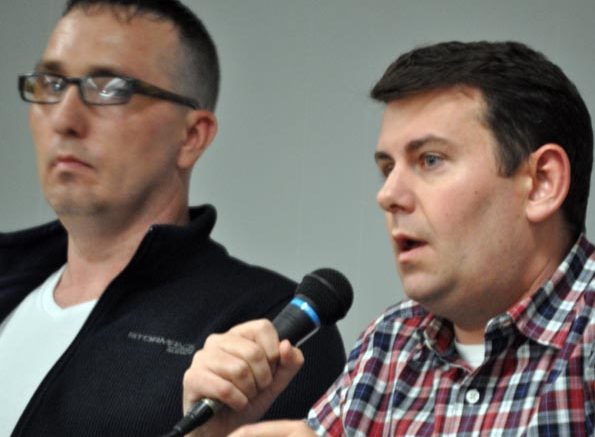 Economic development and community engagement were front of mind in Deseronto last Thursday evening as prospective members of council addressed the public at an open meeting.

During a session organized by the Deseronto Business Improvement Association (DBIA) at the local Royal Canadian Legion Branch, mayor-elect Dan Johnston and deputy mayor-elect Steven Everhardus offered a glimpse of their vision for the town, while council candidates Norm Clark, Amber Dale Hudson, Brian Cherry, and Kevin Smith had an opportunity to campaign for three contested seats.

The initial question offered by a panel of DBIA and media representatives seemed to set a tone for the evening as the speakers were asked what they would do to help the town attract and sustain business.

Johnston said it starts with finding the community’s needs and attracting companies that would serve them.

He said through that process council can work with the DBIA and the community to attract business.

Everhardus noted that while many smaller communities in Ontario are struggling with business attraction and retention, the town can take advantage of its location between Napanee and Picton, who are both thriving by embracing tourism.

“We need to start leveraging our beautiful waterfront and what people want to do on weekends. What we really need to do is draw tourists in,” he said.

Clark, the existing mayor who said he is stepping down from that position to allow new voices, said business attraction and retention has been something successive councils have struggled with. He said publicizing incentive programs offered by Hastings County were one way the town might succeed in attracting new businesses.

The speakers differed on whether adding an economic development staff person would be a good investment.

Johnston said the town has attracted two key staff members recently, including its chief administrative officer, that would  bring new ideas themselves. Everhardus said Hastings County offers some of the skills a dedicated staff member would provide already and felt it may not be the best use of money. He said keeping taxes low and increases predictable is one way that the town could showcase itself to attract new business. Cherry just moved to Deseronto a little over a year ago and he said he wasn’t sure a dedicated person was the answer, either. He did remark, however, that he found regulations to be a barrier to starting a business within the town and felt it important to review them.

Hudson said she felt whether a staff member was required or not, the town appeared to be “missing the community engagement piece” and needed to find what people wanted to see so that it could work toward it. She indicated her top priorities for council include improving community awareness and involvement in economic and recreational development.

“I do believe we need an economic development officer,” he said. “Perhaps it’s not a 40-hour week or even a 20-hour week, but we do need someone to look after the development of your business section. You don’t realize what you’ve got until it’s gone.”

The speakers were also asked about a perceived level of morale in the town and the idea of festivals and events as a driver.

Clark vehemently denied there is a morale problem.

“I get annoyed sometimes when people talk about Deseronto and low morale. I’ve lived here since 1972 and if I thought Deseronto wasn’t a good place to live and there wasn’t good morale, I wouldn’t live here. There’s great people here. When things go bad, people get together and help each other. That’s not the same in all communities. I don’t think there’s anything wrong with the morale in Deseronto. I think we need to encourage and do more things in the community.”

Cherry said he’d like to bring at least one event a month to the town and he hoped within two years to have an event that would bring 5,000 people to Deseronto within four years. Several speakers talked about bringing back events like the Waterfront Festival and fishing derbies as a way to not only bring the community together, but also to attract tourism.

There was some talk of using fishing as an economic driver, with speakers saying more can be done to let visitors know about the amenities offered in town to get them to leave Centennial Park and explore. Johnston said upgrades to Centennial Park to provide showers, washing and drying facilities, and docking for overnight visits may promote the waterfront.

Recreational programming and activities for youth was a related conversation.

Johnston said Deseronto could look to partner with neighbouring municipalities to offer programs. Clark agreed recreation is key for the town and said the present council has been looking at the recreation picture for all ages.

“If you don’t have recreation, you won’t have young couples buying houses and registering kids in school. This council is looking at the whole picture of recreation, what we can do not just for small kids, but for teenagers, middle-aged people, and seniors.”

Hudson said she’d be a big proponent of developing recreational programming in town. She recently brought Girl Guide programming to the community and said there are opportunities to provide other opportunities for all ages.

Smith agreed saying that many recreational organizations haven’t been in Deseronto for some time.

“We have none of that here and we haven’t had it for a long time. You have to go to Napanee to do it. We need somebody to step up to the plate and bring them back.”

The speakers were also questioned about their feelings on marijuana businesses setting up in town. Johnston, Everhardus, Hudson, and Smith each took a wait-and-see approach, hoping to learn more about the issue and consult with residents about their wishes. Smith said he wouldn’t like to see a store on the Main Street, but would commit to a community vote.

While Cherry said he personally takes a libertarian view, he’d take the community’s direction. He doesn’t see marijuana shops becoming a reality within the town’s borders, however.

Clark made allowances for medicinal marijuana sold through the drug store, but said that’s where he draws the line.

As in most political discussions in Deseronto in recent years, the Mohawks of the Bay of Quinte and the Culbertson Tract land claim also creeped into the discussion. Everhardus acknowledged it’s an “elephant in Deseronto’s room” but said there are hundreds of land claims in communities across Canada. He said the most important thing is the relationship between the two communities and their people.

“At the end of the day, Deseronto and the Mohawks of the Bay of Quinte have a tremendous working relationship — it’s incredible,” he said, adding he feels the communities are “really one.”

Johnston added many people in Deseronto have Native status and the rapport between the communities continues to grow as they share services. At the recent Mohawk Fair, he said he felt “nothing but love for this community” and said the next council can continue to build on the relationship.”

Cherry also didn’t see it as an issue for the town to be concerned about as he doesn’t see any differences.

“People are people. We just want to get up and get our jobs done and move on. We will overcome this issue by the way we live our lives.”

Clark said he had talked to MP Mike Bossio and he didn’t believe there was any indication the claim would be settled any time soon. He also added the average land claim in Canada takes 27 years to solve. He said the communities “get on terrific” but added that he would stand up for the residents of Deseronto if the federal government ever decided to offer land.

“As long as I’m in council and have breathe in my body, I’ll fight to make sure Deseronto remains Deseronto for the people of Deseronto,” he said.

Smith said the federal government will look after the claim, but Deseronto should focus on maintaining a strong, peaceful relationship with its neighbours.