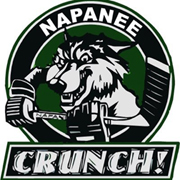 The Novice B Crunch beat the Belleville Bearcats, 7-1

-The United Restaurant Atom B split their home and home on the weekend with the Lindsay Lynx, winning 2-1 in Lindsay on Saturday.

On Sunday they were on the opposite end, losing 2-1.  Kailee Jacklin had the lone goal from Norrah McGuinness. The goalies, Mikenna Ford and Yakowennare Brant split both games.

-The Bantam A Crunch beat the Scarborough Sharks, 3-2.  Meena Peterson earned the win. They followed that up with a 2-1 win over West Northumberland Wild.

The Bantam B Crunch beat the Ennismore Eagles on Saturday, 5-0 for their first win of the season.  Savannah Mumby was unbeatable in the crease for the shutout.  Claire Whitney scored four goals and added an assist.  Natalie Mills scored the other goal and added two assists as well.  Huntyr Haines also had an assist.