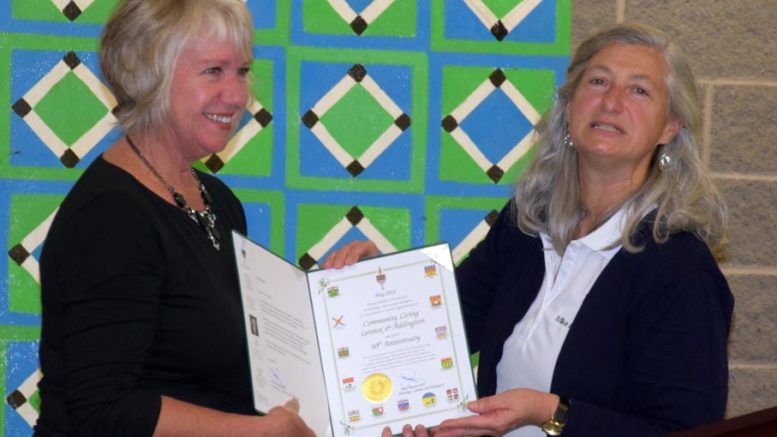 Founded as a small workshop on Slash Road in the summer of 1969 to now hosting several offices and a bevy of programs throughout the county, Community Living Lennox and Addington has seen plenty of growth over the last 50 years.

The non-profit agency, which advocates for people living with intellectual disabilities to be included in all aspects of society, celebrated its golden anniversary last Tuesday at the Strathcona Paper Centre with a retrospective. They highlighted their many accomplishments and looked back at how far they’ve come from their humble beginnings.

In that time the agency has been guided by three executive directors, Bill Pollard, Don Neilson and Barb Fabius — who continues to hold the title today.

A brief overview was given of the exponential growth that was seen during the tenure of each of the leaders, starting from the days of the Adult Rehabilitation Centre, which was a workshop housed in the Happy Day school building on Slash Road.

“Soon it became obvious the workshop was too small to accommodate the growing need, a new building was required,” said Lori Morris, a past president of Community Living L&A and current board member who served as emcee for the night.

Under the leadership of Pollard, they successfully lobbied the province for 80 per cent of the funding needed to build a building at 99 Richmond Blvd. on a road that previous didn’t extend past the Quinte Detention Centre.

Through the help of community individuals such as Bruce McPherson, more than enough was raised for the new building, with a surplus big enough to build a group home on Camden Road.

After 30 years at the helm, Pollard gave way to Don Neilson, who oversaw the next two years.

When the agency began looking for its next executive director, Morris said they quickly identified Fabius, who had worked in a similar capacity in Prince Edward County, as their top candidate. She was given the job in 2001 and has continued to grow the agency to include the Downtown Hub, a store that sells handmade crafts and treats made by its members and the recently opened employment services and independent living support office in the Willy Dog building on Camden Road.

“Under Barb’s leadership the agency’s expansion continued,” said Morris. “Most prominently Barb increased the exposure for the agency in the community by effective marketing.”

Fabius has coined the term ‘beyond the building’ when talking of the services they offer.

“A great number of individuals are now accessing their community with employment and volunteer opportunities,” said Morris. “The recreational experiences offered to individuals are increasingly happening beyond the building.”

Their services have also grown to include job training.

“The community is very open to having these job and volunteer opportunities for our folks,” said Fabius.

That was evident by the large turnout to Tuesday’s celebration.

“We were delighted with the response,” said Fabius. “A variety of people attended, including support staff and family members.”

As part of Tuesday’s celebration, a number of people who rely on Community Living services were recognized for their success in finding minimum wage paying jobs and volunteer opportunities.

“We’re extremely proud of the history of this agency,” added Morris.

“It was a grassroots movement and its remained true to its local origins.”

A community barbecue will be held today from 11 a.m. to 2 p.m. as a thank you for all the support they’ve received from Lennox and Addington. Everyone is welcome to attend the event, held at 99 Richmond Blvd.