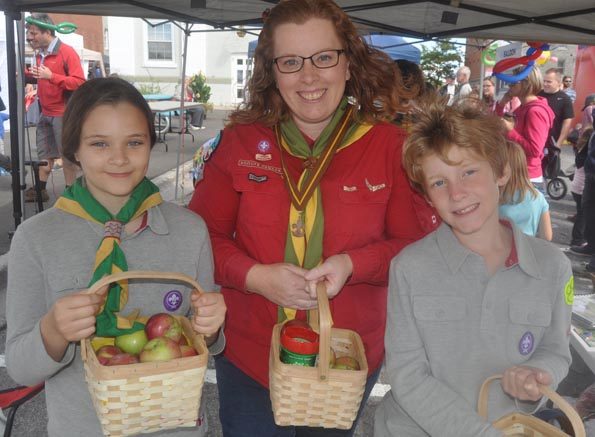 As if the crisp, bright weather and the last chance to buy fresh produce at the Hometown Market weren’t enough reason on their own to come downtown Saturday, Napanee threw a party.

The Market Square was wall-to-wall people during the day as visitors came from near and far to experience the annual Downtown Napanee Scarecrow Festival and Culture Days event.

Walking past barricades on John Street, visitors could immediately grab a bowl of chill from Legion volunteers or stop with a 4-H volunteer to get up-close and personal with a baby goat. Not far away, the sounds of live music were echoing from the steps of Town Hall. Children lined up to bounce down a giant slide, while families posed for photos in goofy hats with cutout scarecrows.

Mother and daughter Michelle and Kaitlyn Tofts, of Kingston, knew they had to stop and check it out.

“When we saw this, it looked neat and would make for a lot of fun — especially the pumpkin carving,” said Michelle. “It’s the one thing she wanted to do.”

The Tofts had already done some apple picking this fall and were on the lookout for the next activity.

“We’re just trying to get our fall events in,” Michelle said. 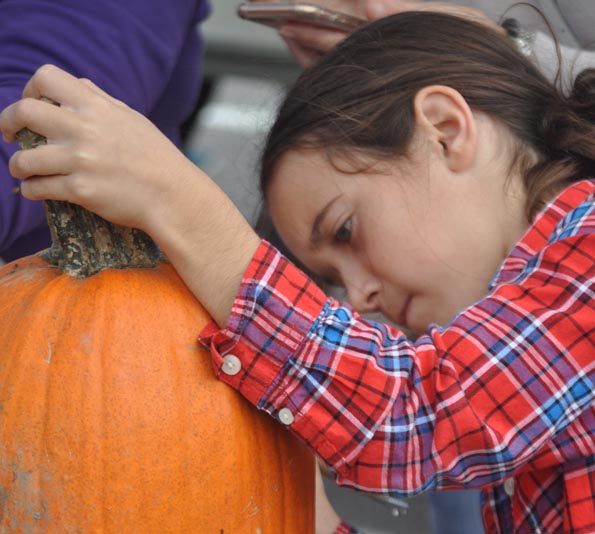 Kaitlyn Tofts carves her pumpkin with precision on the Market Square Saturday. The Kingston native was chiseling an owl into the side of her pumpkin. Photo by Adam Bramburger.

Kaitlyn, meanwhile, continued to work with her chisel in the side of a pumpkin, creating a face she thought might turn into an owl.

Diane Irwin, of Workshop Wizards, has been teaching pumpkin carving at the festival for several years now. She also goes into schools. The technique she was showing her visitors involved using scalpels that were designed as pottery tools to chisel clay. They’re prefect for pumpkins — and for youth — she said, because the blades aren’t dangerous, but cut soft materials well.

Irwin said at the start of the day, there were 100 pumpkins for carving, but a little after noon barely a fifth of that remained, and that’s even with some carvers spending extra time to add detail.

“We’ve had a wonderful turnout with a lot of kids turning out to pick a pumpkin and even a few adults,” she said. “They’re learning to work with different mediums than they’re used to.”

Over by the children’s games, organized by Lennox and Addington Resources for children, local dairy educator Lisa Brennan handed out white moustaches and invited guests to grab the cow Maple by the udders. One of six replicas of a dairy cow spread across Ontario, Brennan said Maple has a busy schedule of fairs and events throughout the year. The demonstration is invaluable in connecting people with their agricultural roots and learning about producers that make the food they enjoy.

Cub Scouts from the 1st Napanee Valley troupe changed up their fall apple days fundraiser in order to share the harvest celebration.

Instead of being posted at stores in the community, they wandered the festival grounds with baskets of apples to offer. People were quite receptive to the fall treat.

Visitors to the festival also had a chance to leave a lasting impression by taking part in a palette art project. They were asked to draw faces of people having fun and cheering for a piece called “The Crowd Goes Wild” which will eventually hang at the Strathcona Paper Centre. By 2 p.m. there was nary a spot to be found to trace a face onto the boards. The town’s arts and culture advisory committee chair Tim Nimigan said an artist would trace over the faces with marker, then add colour, bodies, and background to complete the project.

The festival also appeared to be a boon for downtown businesses, particularly with the Gibbard District running a promotion where people could taste locally produced food and tour demos of its proposed condominiums. Sidewalks on Dundas Street were busy with pedestrian traffic stretching from Centre Street to the former furniture factory.

The Napanee BIA organizes the annual Scarecrow Festival in conjunction with the town.