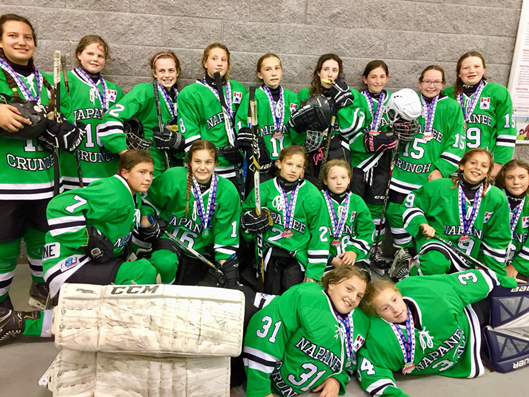 The Napanee Crunch Peewee BBs got won the silver medal at the Oshawa Lady Generals Fall Classic this past weekend.

They started off the tournament with a 2-1 victory over the Clarington Flames.

Goals were provided by Alaina Holmes and the game winner by Charley Weir.  Assists went to Stella Sutton and Hailey Lay.  Diana Wharton was the winning goaltender.

In the second game they rolled to a 7-0 win over the Orangeville Tigers. Keyra Herrington earned the shutout.

Kristen Sutton and Sienna Eberle both scored twice while Nicole Geenevasen, Taryn Landine, and Weir each had one.

After a tough 1-0 loss to the Peterborough Ice Kats, the Crunch were tasked with a must win Game 4 to advance to the semis.

Napanee answered the bell, skating to a 2-1 win over the North York Storm. Herrington earned the win with Sutton and Holmes providing the offence.

McConnell had two assists with Lay and Sutton each earning one.

In the semifinals the Crunch exacted some revenge on the Ice Kats, topping them 2-1.

Weir netted both goals while Lay, Sutton and Landine had assists.

In the gold medal game the Crunch were shutout 1-0 by the undefeated Aurora Panthers.

Napanee put the pressure on late in the third with the goalie pulled but just couldn’t bury a goal. Herrington stopped a couple of breakaways to hold the Crunch close.

In spite of being short handed, the Midget BB team had a strong showing at the Oshawa Fall Classic.  The team ended up in third place with a record of 2-1-1 just narrowly missing advancing to the championship game.  The coaching staff was very pleased with the great team effort as the team readies for the regular season to begin.

Went 2 and 2 over the weekend.