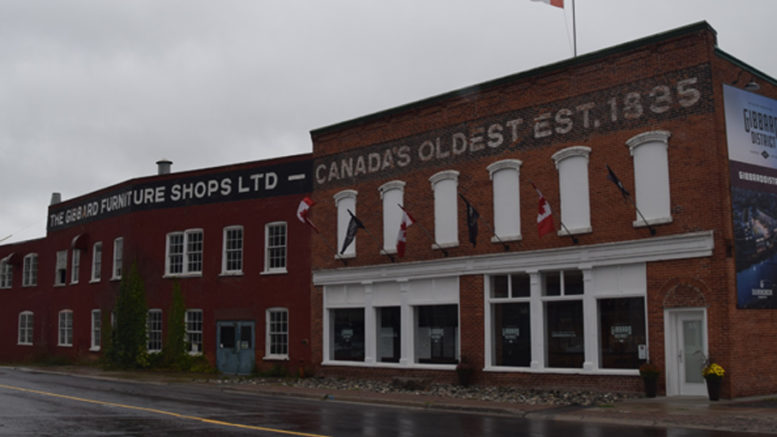 The Napanee Gibbard’s building will be the site of an employee reunion on Oct. 20. The gathering is open to former employees from any era and will include a group photo outside the factory. Photo by Adam Prudhomme.

October will mark the 10- year anniversary of when Gibbard Furniture Shops began the process of ceasing production and closing its doors for good.

One of the last workers to walk through that door, Dave Peterson, is looking to mark the occasion with an employee reunion on Oct. 20.

He’s invited all former employees to meet at the building for 1 p.m. that day, where they’ll gather for a group photo. They’ll then tour their old place of employment and gather at the Loaf n’ Ale to catch up and reminisce.

Already there’s been plenty of interest from former Gibbard’s employees who plan to attend.

“I put an ad in the Beaver and the response surprised me with how many people said ‘Yes,’” said Peterson, who started working at the iconic furniture factory in 1969.

“The drive for it now is the picture. We’re having a picture taken in front of the factory on Oct. 20 at 1 p.m. and we’re going to use the old benches that we always sat on.”

Large group photos outside the factory were the norm during the factory’s heyday. With the help of Doornekamp Construction, they’re hoping to recreate that tradition with a professional photographer. Peterson is hoping to gather as many former employees as possible for the snap.

“When the factory closed, there was a little under 70 employees,” said Peterson. “This picture that I’m having done is for people who left before that. It’s a history picture. It’s not just about the people who were there when it closed.”

Peterson says it wasn’t uncommon to see Gibbard employees earn recognition for having worked there for 25 or even 50 years. Rare in today’s job market, Peterson says the factory workers were like family and tended to stay with Gibbard for most, if not all, their working lives.

“We made the best product in Canada,” said Peterson. “That was a reason to be there. Once you got there, the reason most guys stayed is because of the friendships. Everybody has different stories. Gibbard’s was a really unique place. It’s an internal family.”

Peterson says he’s hoping to catch up with coworkers he hasn’t seen for upwards of 20 years. While he’s had a pretty good response through his      Facebook event page, where 35 people have confirmed and 50 have said ‘maybe’, he says there’s been plenty of buzz just through word of mouth as well.

“I think it’s going to be a lot bigger than I anticipated,” he laughed. “But that’s a great thing.”

Peterson says Doornekamp Construction, which purchased the building and is now in the process of renovating it into a development of two condominium buildings and  storefronts, known as the Gibbard District, has been great about helping him organize the event. He says he’s also pleased with how they’ve strived to incorporate the history of the building into their futuristic designs.

“It’s run its day,” Peterson said of the Gibbard’s building. “Everyone says it’s a shame (the factory closed down), but it’s not really a shame. It’s a new beginning for the factory.”

For more on the event search Gibbard Reunion 2018 on Facebook or email dpeterson061@gmail.com.