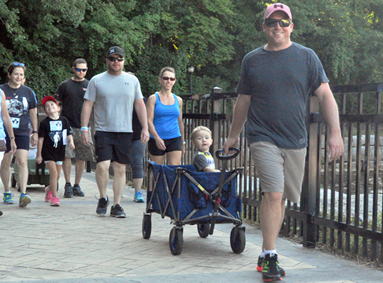 A steady stream of people left Conservation Park by foot, on skates, on bicycles, or pulled in wagons Sunday to travel five or 10 kilometres any way they could, drawing on the spirit of Terry Fox.

An unseasonably hot morning didn’t stop the Napanee community from raising $11,219 for cancer research as everyone at the community’s 37th annual run — including two firefighters in full uniform — pushed on selflessly.

A good number of the walkers departing at the official start around 9:30 a.m. pointed to Beth Casselman when asked about the reason they found themselves on the new routes this year, along the Napanee River boardwalk and through downtown. Their walk is a tradition she takes pride in keeping.

“I’m the team captain for these guys. We lost our dad 11 years ago to cancer, so we started with Relay For Life and jumped ship and came over to the Terry Fox Run about four years ago,” she said. “It’s all family — aunts, cousins. There’s about 30 of us.”

The group spanned three generations and, alone it has raised about $60,000 over the past 11 years. Some of the youngest participants in the group took turns being pulled along and walking, but all showed their dedication. Casselman’s daughter Lily, for example, jogged right out onto the course.

“She loves it,” Beth said. “Lily understands. Last year, she cut off her hair and raised money for cancer. It’s very near and dear to our family.”

The fundraising effort is so much more than just walk day, too. Each year, Casselman said the group hosts a big yard sale to help increase its donation. It’s a lot of work, it is meaningful.

“Everyone thinks I’m crazy for doing it, but there’s just that tiny little bit that each one of us can do for the cause,” said Casselman, who added she is hopeful to see a cure in her lifetime.

“That’s why we’re here and why we walk it and raise money to hope that one day — too many people have been lost to cancer. Everyone knows somebody who has fought cancer and somebody who has lost their life.”

Indeed, that is a motivator for many who take part in Terry Fox runs. Paula Godfrey and Zita Lynch were among the 161 people who walked the course together in the heat, with Lynch noting they’ve done it for years together. She proudly stated she runs for her mom and dad, while Godfrey was dedicating this year’s run for a next-door neighbour.

Though the ladies took note of the heat, they said they were enjoying their time on the course. They also said they liked the changes made this year and felt the routes were safer for families than the industrial park and its lack of sidewalks.

Casselman agreed with that assessment.

“Walking down the boardwalk was really nice. It was nice not walking down Centre Street on the busy road. This was much easier and it didn’t seem as long, actually.”

Mike and Lisa Coles brought their children Lucas and Sophie for a run. While Mike said they weren’t running for anyone in particular, they always try to make time to take part in the run.

“We’re trying to stay active and it’s training, too. The kids are in a running club.  We like to help out and raise some money for a good cause,” he said. Lisa added their family always tried to be involved with Relay For Life when it was in town, but since it isn’t in Napanee any more, they’re happy to be a part of the run. She said they raised some money and the children were looking forward to adding to the total when in the upcoming school run.

Going into the Sunday’s 37th run, the Napanee site had raised $541,465.71, according to Michelle Way, one of the organizers alongside Kelly Schermerhorn and Carol Anne Hanna. That is just from the community run and not the schools. Way said online pledges going into run day surpassed totals from the same time last year,  so there was optimism this would be a good year. Some 82 cents of each dollar raised goes directly to cancer research and the local team of volunteers and organizers gives generously to minimize costs where possible.

Mayor Gord Schermerhorn thanked the volunteers, organizers, and participants for all they were able to give.

“We all certainly know someone stricken with this terrible disease. You’re doing a great thing today to raise research money for cancer,” he said. “Enjoy the walk and have fun, you’ve done a great deed this morning.”