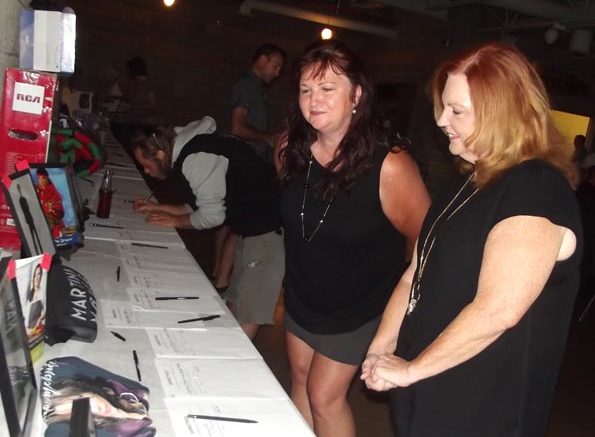 Laura MacLaughlin, left, and Wendy McDonald check out some of the silent auction items available during Garrettfest Saturday evening. Photo by Terry McNamee.

Fifteen-year-old Garrett Mills wanted to make a difference in this world. His accidental death in May 2017 did not stop that dream from coming true, thanks to the help of his family and friends.

On Saturday,  the second annual Garrettfest was held at the Strathcona Paper Centre to raise money for a scholarship fund for students at NDSS who follow his example of wanting to make the world a better, safer, more peaceful place.

“Just days before he passed, he asked me, ‘What is a legacy?’ ” his father David Mills (known to many as Buzz Collins) said. “I told him what it was, and he said, ‘When I go, I want to leave a legacy.’

Last year’s Garrettfest raised enough money to provide two students with scholarships, and this year’s event drew even more people and more donations for door prizes, a silent auction and a live auction. Nearly 100 per cent of the money raised goes into the scholarship fund.

“Almost everything (for the event) is donated,” Mills said. “The hall is donated. The bands donated their time.”

Garrett died when an unanchored outdoor soccer net fell on him and the crossbar hit his head. He is one of more than 40 children and teens in Canada and the U.S.A. who have died in similar accidents. Garrett’s family wants to keep these tragedies from happening again and are hoping a private member’s bill requiring all soccer nets to be properly anchored will be passed in the Ontario legislature this year. It has passed first and second reading and now is being discussed in committee.

“It’s called Garrett’s Legacy Act,” Mills said. “We hope it gets passed before the end of the year. Once we get this taken care of in Ontario, you can trust that I will be putting a bug in some other people’s ears outside of Ontario. It’s not an expensive law to enact.”

This year’s Garrettfest included 53 silent auction items, eight live auction donations and performances by three bands: Kings of the Cold, The Great Unwashed and the Trevor Walsh Group, something Garrett would have appreciated, since he loved music, Mills said.

Brad Way, also of Napanee, had not met Garrett, but knew about him.

“I bumped into Buzz about a year ago,” he said. “What activated me was Buzz talking about his son. I wish I’d had a chance to meet Garrett. He sounds like he was an amazing kid.”

“He was a great kid,” said Jeff Huffman, who is married to Garrett’s sister, Brooklynne. “It’s wonderful, the amount of people that showed up this year.”

“It’s nice to see the support from the town and that people want to be a part of it,” Brooklynne agreed. “It’s really good to know that Garrett is being remembered in a really positive way. That means a lot.”

His family said that Garrett loved spending time hanging out with his friends, but also liked being with his family. He loved his dog, he loved nature, he loved non-violent video games and he was thinking of becoming a photographer. He was a peacemaker and was cheerful and upbeat. Before he died, he posted a slogan on his Instagram account that said, “Get out there and change this world for the better!”

Brooklynne has many happy memories of her little brother, so what stands out?

“His positivity,” she said. “There is literally no one I’ve ever met (like that). It would mean a lot to him to know that his name will have such a positive impact on someone’s life. That’s really special.”