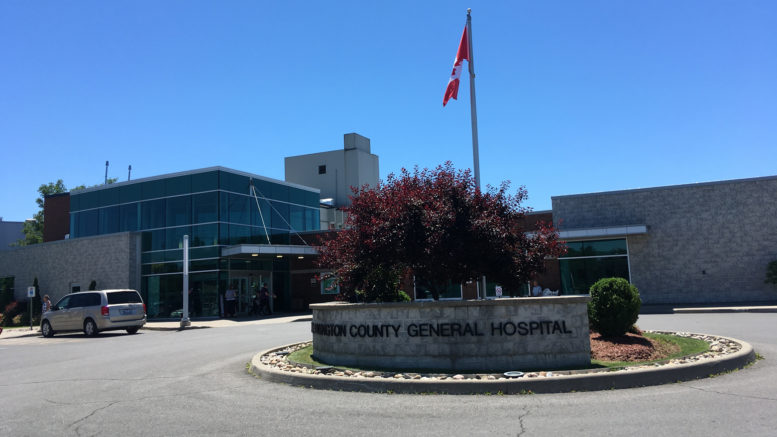 Lennox and Addington County Memorial Hospital (LACGH) remains at the final stage in a lengthy process to gain designation from Ministry of Health and Long-term Care as a computerized tomography (CT) scan site.

It may seem like it has been a long time since the hospital announced through its foundation last fall that it was raising money to acquire the technology that creates cross-sectional images of soft tissues, bone, and blood vessels, but the hospital is within the normal time parameters for such an application.

“Generally within 18 months to two years is the magic figure for the Ministry of Health’s turnaround,” said LACGH chief executive officer Wayne Coveyduck. “We’re well over a year now.”

Over that time, Karen Pearson, the director of imaging services for the Kingston Health Sciences Centre and LACGH, has been the point person working with the ministry on the designation process. She explained that especially in hospitals without a CT scan, there’s a detailed process to gain approval for the diagnostic tool.

“It is a very expensive piece of equipment that is costly to operate, so the ministry wisely ensures that there is a need for an additional CT in the region, and that it will support the health-care needs of the patient population, and that the CT is operated in a manner that suppress the overall health and patient flow and access to care within the region,” she told the Beaver.

Pearson said once doctors at LACGH identified a need for the imaging, the hospital put together a business case for the scan. That involved reviewing wait times in the region and gaining letters of support from other health-care providers. That business case went to the South East Local Health Integration Network staff for review and questioning before its board approved the concept.

Looking at that business plan, Pearson said approximately 3,000 patients from Lennox and Addington go to Kingston alone for CT services. Some also go to Belleville. Demand at those larger, more specialized hospitals continues to increase and it is becoming a burden.

“We’re struggling this year with the sheer volume with oncology and the ends of cancer patients. It’s becoming more difficult for Hotel Dieu and KGH to manage the volume,” Pearson said. “We just had a discussion this afternoon on our anticipation, hope and excitement that when L&A gets a CT it will help us manage the volume we have coming our way.”

Pearson said in addition to patients coming to directly to Kingston for specialty or emergency services, the hospitals also receive patients sent from LACGH’s emergency room that get prioritized and must be fit into the schedule for its scanning operations. Sending people out of Napanee for those tests can also cost the hospital system money as it requires the use of an ambulance or patient transfer system.

Overwhelmingly, Pearson said, the systemic need is there. There’s also the factor of patients — including seniors and children — not having to travel for scans, which adds convenience and aids wellbeing. The fact that Napanee has its own outpatient chemotherapy unit was also a consideration.

“All the good reasons are there. It’s  financially sound, well-supported by the LHIN and peer hospitals,” said Pearson, who insisted the service be available 24/7 to allow for urgent cases after hours.

The project is also keenly supported by a radiologist group, directed by Dr. Annette Polanski.

Following board approval from the South East Local Health Integration Network, there have been discussions with ministry staff who have supported the rationale and need for the service.

“There questions were very little. We prepared very well on the business case,” Pearson said.

The final step is a review from a separate branch within the ministry that’s more on the construction side, known as a pre-capital submission. It requires significant details on the construction, layout of the space and mechanical, electrical, and structural drawings. Once that stage is passed, the deputy minister can sign off for the project to proceed. Pearson said every major capital project in health-care goes through the process.

While a recent government change at Queen’s Park meant new ministers and new high-level staff, Pearson is optimistic that LACGH will receive the go-ahead in the near future to continue.

“I’m hoping it won’t delay it too much because the same group works until the final sign-off from the deputy minister, but we never know,” she said. “I will not give you an estimated date of install and operation. I wish I could. Though I think we have almost everything wrapped up, there can always be surprise questions that delay final designation approval.”

If designation is received, the hospital will begin working on purchase and install. Pearson said the process won’t take as long as some other installations she’s been involved with, including Kingston’s MRI project, because LAGCH already has an ideal space and it has a team of skilled tradespeople familiar with requirements of hospital work after completing the dialysis and acquired brain injury spaces.

“It can vary because of how ready the site is. In our case, we’re ready to go.”

Pearson said lead-in delivery from a vendor can take about 8-10 weeks, but installation is relatively simple. The machinery and software can be up in running in couple days and testing typically takes about a week. There also will be effort spent developing billing practices, patient flow, after-hours support. Continued attraction of technologists to operate the equipment is also required. Thus far, Pearson said recruitment efforts have been successful.

The equipment itself can cost between $800,000 to $1.7 million depending on the software installed. Pearson said LACGH’s machinery won’t be near the top of that scale — the extra cost comes in more specialized software useful at a tertiary centre, but the system will be state-of-the-art.

“What we’re getting is a unit that will meet all the community hospital’s needs. It’s very similar to what they’d have at Quinte and what would be at KGH.”

Looking back at the lengthy process and the close involvement with staff at LACGH, Pearson said she’s pleased with the way the hospital has handled its preparations and she’s looking forward to sharing positive news.

“It’s been a lot of work, but it’s fun to build something from the ground up. The energy and positive excitement of it is very rewarding” she said. “All the staff — from radiologists to emergency docs to technicians, right through to maintenance and housekeeping — everyone is involved and excited. It’s refreshing to be a part of something where everyone feels they own a piece of it.”