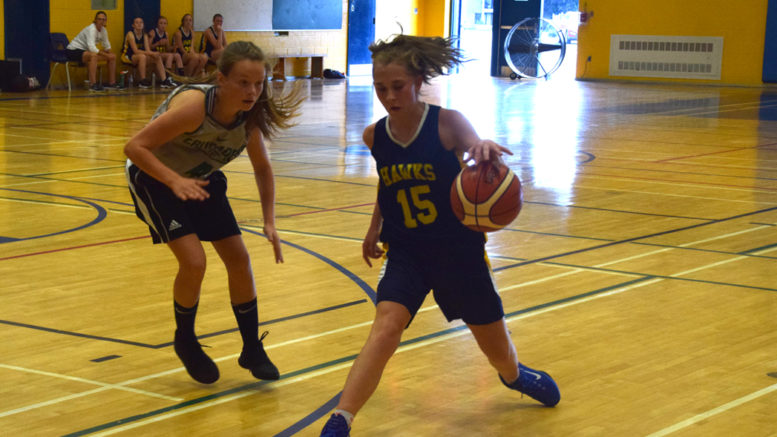 Napanee’s Leah Carscallen drives to the basket and attempts to get around a Holy Cross defender. Photo by Adam Prudhomme.

The NDSS Golden Hawks junior girls basketball team had the honour of hosting the school’s first home game of the 2018-2019 KASSAA season on Tuesday.

Unfortunately for them they drew a very tough opponent, falling 47-15 to the Holy Cross Crusaders.

Napanee had to wait until the very last second of the first quarter to sink their first basket of the season, courtesy of Samantha Smith. She also drew a foul on the layup and successfully drained the free-throw to make it a three point play. That basket halted a 16-0 Crusader run to start the game.

The young NDSS squad did improve as the game went on, scoring six points in the final quarter while limiting Holy Cross to eight.

Napanee will hope to take the lessons learned in their season opener and attempt to get into the win column on Tuesday when they welcome the Sydenham Golden Eagles for a 3:45 p.m. tip-off.

The senior girls Hawks also dropped their season opener on Tuesday, falling to the visiting Crusaders 43-8.

The Golden Hawks’ girls field hockey team got their season off to a strong start on Monday, picking up a pair of wins on the turf at Kingston’s Invista Centre.

Megan Morrow and Caroline Griffin, the Hawks’ two provincial reps, fresh off of representing Team Ontario at the Field Hockey Canada national championship in August, each found the back of the net in a 3-2  win over the Regiopolis-Notre Dame Panthers.

Morrow had two while Griffin had one. Emma Chatterton earned the win in net.In the second game Morrow had two more goals in a 2-0 win over Sydenham.

The Hawks are poised for a big season this year, with 20 veteran players and five rookies. They’ve already shown an improvement in their scoring ability, an area that has traditionally been where they’ve struggled.

They’ll look to build on their strong start on Monday when they take on the defending league champion Holy Cross Crusaders at the Invista Centre. Later that afternoon they’ll face the Ernestown Eagles.

The Golden Hawks’ junior boys volleyball team also opened their year with a win, topping the Crusaders in four sets.

They will host the Frontenac Falcons this afternoon as they look to continue their strong start to the season.

The Hawks’ football teams will open their season this afternoon against the La Salle Black Knights.

The Hawks’ football teams will play their entire schedule as a road team this year as renovations continue on the school’s track around their field.