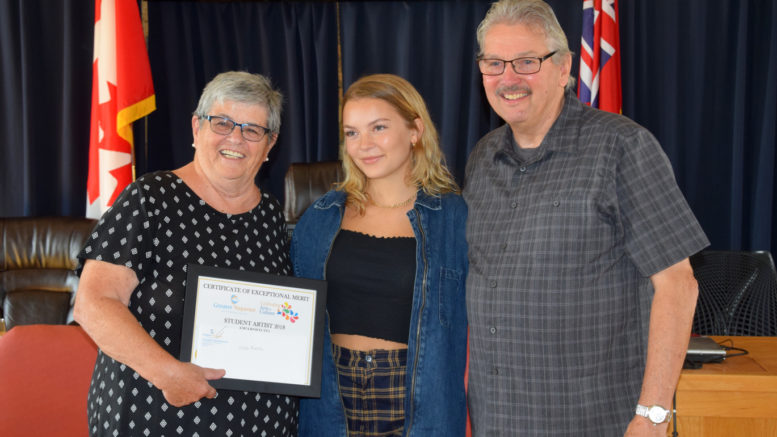 Wowing audiences across the world with her golden singing voice since she was eight years old, Tyendinaga’s Noelle Maracle took the next major step in her music career by inking a record deal with Wax Records, a division of Universal Music Canada.

Now 17-years-old, the graduate of Napanee District Secondary School has spent much of the last couple of weeks writing and recording in a Toronto studio.

“They’re just helping me have a platform to be able to write and record with big writers and producers and they’re going to help me get my EP out once it’s finished,” Maracle said of working with Universal Canada.

Her first major label release, which she says is under the working title of ‘Noelle’, doesn’t have an exact release date in mind just yet. She says she’s written or co-written 20 to 25 songs so far and hopes to pen a few more before narrowing down the list for the final product.

Not exactly fitting into one category, she says the EP will best be described as a mix of urban, rhythm and blues and jazz.

“I love the sad songs, but I love to throw in a jazz chord here and there,” she said.

When it comes to writing, she says she can inspired from a wide range of muses whether it be the beauty of the landscape she saw while visiting British Columbia or a real life situation she’s experienced.

“It could be really anything,” Maracle says of songwriting inspiration. “It’ll be 2 a.m. and I can’t sleep and all of a sudden I get a little tune in my head and I write it down or voice record it and I listen to it in the morning.”

Born into a musical family, Maracle’s first break came when she won YTV’s Virtual Star singing contest at the age of eight. During that time she had also built a huge following on YouTube, drawing more than 22 million views.

Earlier this year she earned national exposure as a contestant on CTV’s The Launch.

“It was amazing to be able to sing with Julia Michaels and sing her songs to her,” Maracle said of her experience with The Launch. “It was crazy. The advice I got was amazing and it was just overall a good experience. It was really good to get a feel for what I’m going to be going into (with the record deal).”

While appearing on The Launch helped introduce her to a national audience, it actually played no part in getting her the deal with Universal. The record company had expressed interest in signing her before the show even premiered, offering her a deal just a week after she had signed a contract with The Launch, which precluded her from signing a record deal for eight months. Once that contract expired, she signed on with Wax Records and got right to work on her debut release.

“It has just been a great environment and has also inspired me,” Maracle says of her musical upbringing.

A familiar face on the local music scene growing up, singing at major sporting events and festivals in L&A County and on the reserve, she hopes to have some shows close to home once she hits the road following her EP release. Until then she’ll be making several trips into Toronto to work with some of the premier songwriters in the industry.

As a recognition of her continual rise to fame, the Greater Napanee Arts and Culture Committee presented her with their Student Artist award.

On Friday she stopped by Greater Napanee’s town hall to accept the award and a $500 bursary.

“It’s such an honour, everybody from the home town area, it’s been really awesome growing up and being able to do all the events and have been supported by all these people, it’s like a really big family, it’s awesome,” she said.