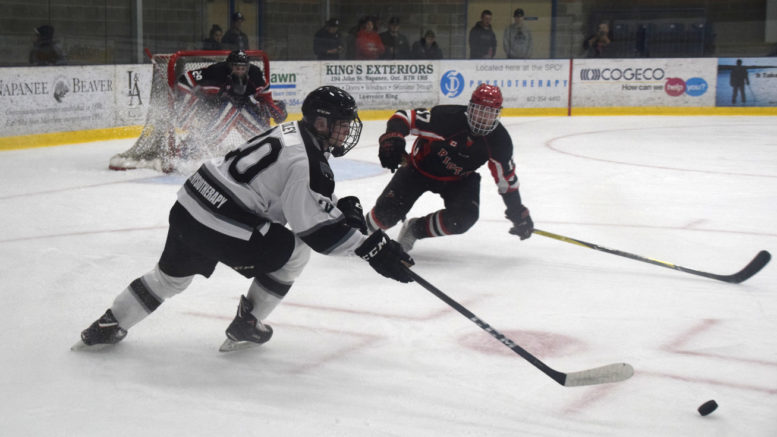 Napanee's Evan Foley attempts to get a shot off towards the Picton net during Friday's season opener. Photo by Adam Prudhomme.

It took nearly a full period for the Napanee Raiders’ overhauled offense to shake off the offseason rust in Friday’s PJHL Junior C season opener, but once it did they were in mid-season form, picking up a pair of wins to open the year.

At home on Friday they steamrolled the Picton Pirates 8-2 and on Saturday they skated circles around their long-time rival Port Hope Panthers, winning 10-0.

Devon King scored Napanee’s first goal of the season on Friday, potting a goal at the 18:13 mark of the first for a 1-0 lead.

That goal seemed to ease the pressure off the Raiders, who had seen their previous 12 shots turned away to open the game.

Ryan Casselman and Jacob Murphy each potted a goal within the opening five minutes of the second frame as the Raiders began to find their groove. Matt Poole broke the shutout for Picton late in the second to cut the lead to 3-1, but it wasn’t enough to stop Napanee’s momentum.

By the third the Raiders were really rolling as offseason pickups Cameron Harris, Reid Humphrey and Dayton Kent all found the back of the net. Humphrey and Kent each had two while Harris had one.

Poole score his second of the game for Picon, but it was much too little, too late for the visitors. Raider goalie Nichloas Nabuurs scoops up a loose puck with his catcher. Photo by Adam Prudhomme.

Nicholas Naburrs picked up the win, stopping 26 of 28 while Kyle McNair took the loss for Picton.

“We started a little flat, but once we got our legs we were good,” said Humphreys after his two goal performance. “Once we got our system going we were just about having fun out there.”

After failing to finish their play for the opening 20 minutes, Humphrey says the team didn’t get discouraged and just kept pushing hard. With so many goal scorers in the lineup, it was just a matter of settling in with his new linemates.

“In the start we were just trying to find each other,” he said. “By the end everything was clicking.”

Acquired from Ayr just prior to the start of the season, Humphrey admitted to feeling a bit more relaxed once he got his first couple of goals with his new club.

“It’s definitely a bonus when after your first game you’ve got two under your belt,” he said. “But most importantly we got the two points.”

Napanee carried their late game momentum right into the next night’s affair as the potted 10 more goals against the Panthers. A long time house of horrors for Napanee over the last four years, this year’s club made themselves right at home at Port Hope’s Jack Burger Sports Complex.

It didn’t seem to hurt that three of Port Hope’s snipers from that time frame-Evan Foley, Kent and Harris-are now wearing Raider black and white.

Those three connected on a goal early in the second, with Foley earning the goal and Kent and Harris picking up the assist in their first visit back to their old barn. That goal made it 4-0 Napanee and they never looked back. Those three were at it again for the final goal of the night, as Harris converted from Kent and Foley on the power-play at the 12:50 mark in the third.

King, Brendan Hagerman, Casselman and Austin Labelle each had one goal while Humphrey and captain Justynn Steven each had a pair.

Bailey Maracle stopped 10 Panther shots for a shutout in his Raiders debut. All told Napanee outshot the reigning league champions 54-10 on the night.

Napanee will look to continue their strong start to the season when they travel to North Kawartha on Saturday to face the Knights for their first crossover game against an Orr Division opponent. On Sunday they return home to host another Orr Division foe, the Uxbridge Bruins. Puck drop for Sunday’s game is 7 p.m. at the Strathcona Paper Centre. Prior to Friday’s game, members of the Napanee Peewee BB Stars were celebrated and their OMHA championship banner was officially revealed, hanging high above the SPC ice. The Stars topped the St. Mary’s Rock in four games last March to capture the BB provincial title. They were a perfect 22-0 in last year’s regular season, and 13-1-1 in the playoffs.