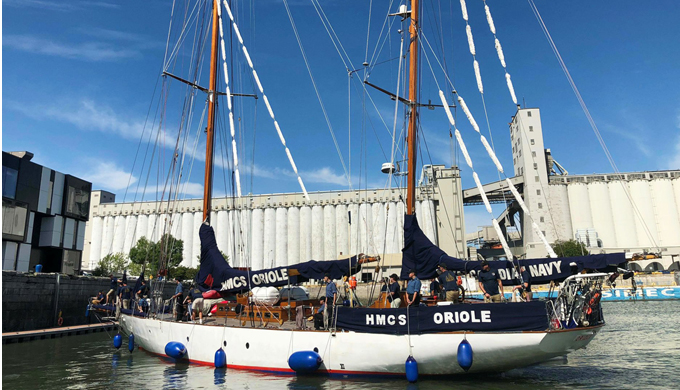 Napanee’s 224 Royal Canadian Sea Cadet Corps member Donovan Near was selected for a trip of a lifetime earlier this month, as he was one of seven Cadets from across the province chosen for a week long sail on the HMCS Oriole.

The historic ship departed Kingston on Aug. 27 and arrived in Trios-Riviere, Que. on Sept. 2.

“I was quite surprised,” Near said of learning that he’d been selected to sail on the ship. “(While onboard) we learned how to tie knots and did safety training.” Donovan Near while onboard the HMCS Oriole. Facebook photo.

Near says he learned quite a bit from the active members during the five day sail. As part of his duties, Near was required to undergo fire and safety training, as well as taking a shift to watch over the ship as it sailed. As with all Navy vessels, the Oriole requires members of the crew to be on watch at all hours of the day.

“Once we arrived we got to tour the area,” Near said of Trois-Rivieres. From there he was flown home to Napanee.

Earning the selection to sail on the ship is considered a prestigious honour.

“Essentially what they’re looking for is somebody who is in good standing with their Cadet organization,” said Lt. (N) Andy Ashworth, an instructor with the Napanee Sea Cadets. “Effectively it will be judged on merit.”

It was Near’s good standing with the local club, of which he’s been a member for three years, that earned him the selection.

This isn’t the first time a member of the Napanee club has earned high level recognition.

“We had another Cadet fly out to B.C. and spend a week on a Navy patrol vessel in the islands off Vancouver,” said Ashworth. “We’ve had a number of Cadets this summer undertake summer training at HMCS Ontario, which is another name for Royal Military College in Kingston, and we’ve had Cadets go up to a training centre in Ottawa where they do a lot of marksmanship principles. We’ve had other Cadets go to the training centre at Blackdown, which is near Base Borden where they will do fitness and sports.”

Other opportunities include sailing on patrol vessels, working with the Coast Guard and Royal Canadian Navy.

Ashworth says while there’s plenty of opportunities for Cadets to travel across Canada and even the world through the program, there’s still lots of activities they take part in locally as well.

“On a more regular basis we offer the ability to go sailing, to mess around on boats, to improve your marksmanship abilities and improve your fitness,” he said.