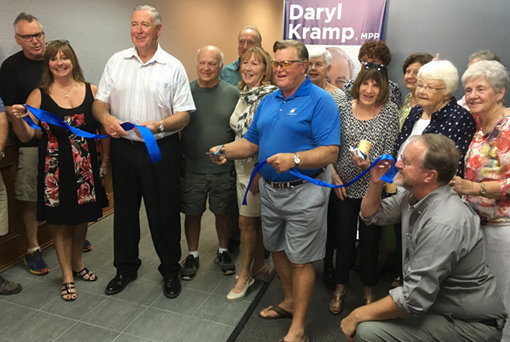 Hastings-Lennox and Addington MPP Daryl Kramp was flanked by wife Carol Ann and a host of supporters Tuesday as Greater Napanee Mayor Gord Schermerhorn cut the ribbon at his new office at 6 Dundas Street E. Photo by Adam Bramburger.

On Tuesday, Hastings-Lennox and Addington MPP Daryl Kramp delivered on an election promise by opening separate riding offices in Napanee and Madoc.

The veteran politician said Queen’s Park officials initially gave him a budget for a single office, but he felt it was unrealistic to serve constituents in his vast office from just a single location.

“This is a huge riding. We’re near five hours from the time we go from down near Amherst Island straight up to just south of Algonquin Park,” he said. “An office just doesn’t cut it in a riding of this size. You can’t have people with problems and challenges, including seniors and those with disabilities driving four hours if they have a problem to deal with.”

Kramp made a promise that he would have offices in both the counties he serves. In the case of Lennox and Addington, he reasoned Napanee as the county seat is accessible to most. In some cases in the north, however, it might be quicker for constituents to reach Madoc.

He said he was determined not to fall short on his goal to deliver the two locations.

“Our word has to be our bond. If I make a commitment, come hell or high water I want to deliver,” he said. “I do believe that. You do need to follow through so people have faith in what you’re doing and what you’re committing to.”

The Napanee office is located at 6 Dundas Street E. in the Downtown Napanee Business Hub building, owned by Shaune Lucas. Initially, it will be open 10-6 from Wednesday to Friday each week. The Madoc office will be open weekdays from 8:30 a.m. to 4 p.m. The limitation of days in Napanee reflects the days staffer Bill Daverne will spend working at Queen’s Park. Kramp said it’s possible that there will be additional coverage locally for constituents concerns.

“The chances are we’re still going to be here a lot more than that. Those are the days we’re open officially, if you need to book appointments or stop in here. We’ve been booking meetings beyond that time frame (already).”

Kramp said his staff is already working actively on a number of constituents’ files as peoples’ lives don’t take time off for the summer. He’s relieved that communications systems have now been installed in the riding offices and that he’s had time to focus on the logistics of local service.

“I anticipated when the election happened we would then have a few months. It was June. I said we’d take the summer to get things organized and deal with some issues. Little did I realize we’d be locked in parliament seven weeks after,” he said. “It was a good decision reached by all members of the parliament — not just the leadership — because there was a lot of work to be done.”

Kramp said he’s seen good and bad from all parties and governments through the years, but said he’s “never even seen this province in such a catastrophic place.”

The Progressive Conservative caucus chair said he’s been heavily involved in the process to see the province’s books reviewed. He celebrated the appointment of two independent auditors to work with the auditor general and parliamentary finance officer to investigate.

The MPP said he’s excited to about hearing people’s challenges and opportunities as both can help build a road map to a prosperous region and province.

About 40 people were on hand for a ribbon cutting Tuesday morning, including a number of campaign supporters and hopefuls in the upcoming municipal election. He thanked them for their interest, engagement, and support and encouraged further interaction.

“Why do we do what we do? It comes back to those two words: ‘It matters.’ I’m trying to ensure there’s a strong, positive future for our area. I don’t have every answer. I need your help, your support, and your guidance.”