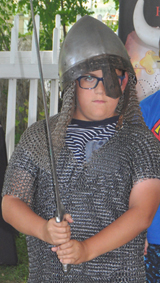 Myles Brooks tries on some chainmetal armour, and an authentic Viking helmet during the Blades of Glory event Thursday at Macpherson House. Photo by Adam Bramburger.

Some students fretfully counted away the days to the dawn of a new school year this week and a series of fresh lessons. Others sought out active learning on their own at Macpherson House last week.

Of course, the presence of a pair of honoured knights in full armour can be very persuasive. Thursday afternoon, the Napanee museum closed a busy summer with over 1,100 visitors passing through its doors by hosting its final Historical Play Day by welcoming Hastings’ Blades of Glory in the garden.

Shawn Trueman, posing as a monk named Brother William, and Harry Heydon, who donned his steel armour led their young followers through dramatic story readings of classic tales “The Sword in the Stone” — the crowning of young Arthur — and “Thorbolt”, the first Viking killed on North American soil.

The young pupils had their chance to wear jewels or real chain metal and helmets, and act out the scenes as they unfolded. They’d hang on the storytellers’ words with enthusiasm.

“The two shows were amazing. I had a really fun time,” said Myles Brooks, who relished his role of Leif Erikson in the second story. He said he hadn’t heard of some of the weapons the Blades of Glory leaders brought with them so their mere presence offered a unique learning opportunity. He said he enjoyed how the storytellers were funny and how they supported their stories with their knowledge.

After passing around different costumes and artifacts, Brooks and some of the other children involved stayed around for more than an hour to pepper the presenters with different questions about lifestyles of Vikings and other settlers, codes that knights adhered to and, of course, the armour and weapons themselves.

Trueman said he really enjoys the opportunity to work with children and bring history to life. He joined the Blades of Glory collective in 1994 after volunteering for a medieval festival and he never looked back.

“I know when I was growing up, history was so boring. It wasn’t one of those things that you really looked forward to. We find that because we’re hands-on, the teachers love us. The kids remember more because we allow them to touch things,” he said.

“We have some artifacts that are over 5,000 years old. If you’re in a museum, they’d be behind glass, you’d never touch it. Here, you’re having a piece of history right there in your hands.”

The Blades of Glory hosts sword fighting schools, festivals, and other events, but founders Heydon — a teacher — and Montse Alvarado, a Loyalist College professor, had an interest in using the craft to teach history. Over the years, they’ve presented to more than 250,000 children. For Heydon, the love of history came at a young age. He recalls his own parents taking him to the Royal Ontario Museum before age 5 and says he “fell in love with knights back then.” He also traced his own genealogy back to knights several centuries ago.

Trueman said the idea of passing on information has inspired members of the collective to read about the past themselves.

“That was exactly how we ended up getting involved in the historical part of it. The kids had so many great questions and we had no way to answer them, so we started studying. Each of us takes a different pieces and specializes in it so if a question comes up one of us hopefully has an answer for the child so they don’t go away disappointed.”

He said typically the children retain more information when they’re actively involved in storytelling. They also really seem to enjoy the opportunity to challenge real-life knights.

Macpherson House programmer Amber Meyer Dunn said she’s been pleased with the way the public responded to the varied programming at the historic site this summer.

“We’ve had a wonderful summer with a lot of positive feedback,” she said.

She hopes to keep the historic site active through school and Christmas programming in the coming months.