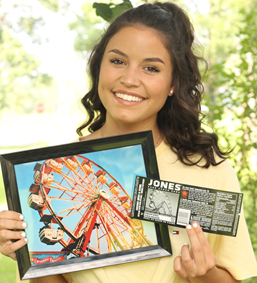 Photographer Samantha Fenwick shows off the photo she submitted to the Jones Soda Company as well as one of the drink’s labels. Submitted photo.

Enterprise photographer Samantha Fenwick’s knack for seeing the world from a different perspective has caught the eye of Jones Soda Company.

The staff of the Seattle, WA based beverage company liked her photo of a ferris wheel from the Kingston Exhibition so much, they voted to print it onto several thousand labels of their popular drink.

The 17 year old was one of 52,000 people across North America who submitted their work in the hopes of having their work grace a Jones Soda glass bottle label-an ongoing competition the company runs. The entries were then put to a public vote however in the case of Fenwick’s photo, the staff liked it so much they voted amongst themselves to use it.

“I was really surprised,” said Fenwick of when she got the letter stating she’d been selected, which included a copy of the label. She had begun to lose hope after not hearing anything for quite some time.

“It was the angle and just seeing it a different way,” Fenwick said of what they liked about her ferris wheel photo. “The colour was the main reason I liked that photograph, but they turned it into black and white. There was a large pop of colours. I definitely liked how abstract the pattern of the ferris wheel was. It just added a different perspective. A lot of people see it head on, but they don’t see it from down below, which is what I did. I was down on the ground and took it from the bottom up. It adds a different perspective of it for sure.”

The recognition was a nice confidence boost for the young photographer, who began snapping photos at the age of 13. Through experimenting on her own time, she taught herself the ins and outs of photography before ever taking her first formal class. That came last year as a Grade 11 at Ernestown Secondary School.

“It helped me with improving my camera skills,” she said of her ESS class.

Her award winning ferris wheel photo is a prime example of her specialty, which is landscapes she takes while travelling. She has also turned her passion into a business, launching SEF Photography where she takes family portraits, shoots weddings and is now looking to start working with models. She’s also been featured at several local art shows such as Newburgh’s revered Art Among the Ruins.

“It’s nice when people come to my shows and say they were there last year and they’re coming back again,” she said. “I have this one family that have purchased from me so many times, when they got a brand new house all of their photos are from me.”

Earning the selection to be featured on Jones Soda isn’t the first time she’d be recognized either as in 2015 she took part in the Limestone Learning Foundation Crystal Ball Gala. During that time she was mentored by professional photographer Suzy Lamont.

She’s hoping having her work featured on glass bottles throughout North America will create even more exposure. Along with her name, her business’ contact information is also included on the label.

While she was mailed a sample label, she is yet to find an actual bottle in a store with her photo on it. She has friends and family across the continent keeping their eyes out for a bottle however and hopes to get one soon.