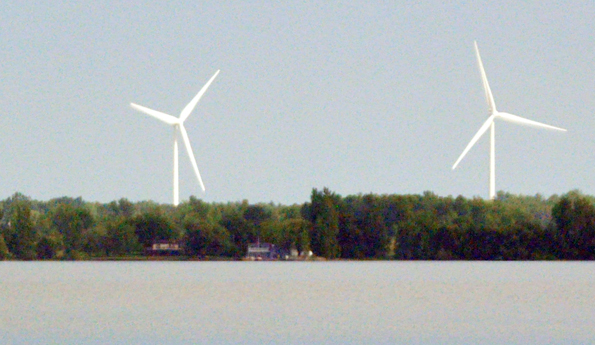 Loyalist Township plans to use all of the tools at its disposal under an agreement with Windlectric Inc. to ensure the timely and satisfactory remediation of Amherst Island roads following the installation of 27 industrial wind turbines.

On Monday, councillors heard a deputation from Association to Protect Amherst Island (APAI) president Michelle Le Lay, who expressed concern about the proponent’s financing and the township’s silence on plans to execute its road user’s agreement right to see conditions restored.

“Windlectric left the island without any known plans to finish the post-construction activities,” Le Lay said. “In the expedited last three months of construction, residents were faced with mud, closed roads, soft and flooded roads, an overloaded ferry, dangerous conditions, 24/7 noise and, contrary to council’s assurance, the road use agreement signed by the township failed to protect the public.”

Le Lay told councillors the township did not provide public information on the project from February to July 4, when the municipality wrote a letter documenting road deficiencies. She said there was a discussion about the project during closed session at a recent meeting, but no public comment or resolutions announced, leaving residents to surmise whether actions were being taken.

“Please at least confirm that you are not continuing to accept the vague assurances of the company that has desecrated Amherst Island and that you are taking immediate action to ensure the roads, draining and related matters are resolved before the fall,” she pleaded.

Mayor Bill Lowry read a prepared statement acknowledging it was expected the construction would result in roads deficiencies and that the township and consultants from Jewell Engineering were in communication with Windlectric officials about correcting deficiencies. He indicated the road use agreement has a template for remediation and that the township was following it.

Lowry continued that Windlectric was required to post a substantial financial security for repairs, adding “Let me tell you it is a heck of a lot more than $500,000.”

The mayor also directed director of infrastructure services Dave Thompson to provide an update. Thompson said officials from the township and consultant Jewell Engineering were on the island to assess damage as the main component of construction finished this spring and they presented their observations and priority repairs.

He said South Shore Road was a specific concern; culverts, side slopes, and ditches would need to be checked, and all roads regraded.

Thompson offered a positive outlook when talking about the municipality’s dealings with the company.

“We’ve had over the last two weeks, I would say, six or seven contacts with Windlectric,” he said. “I don’t want to sound overly optimistic, but the flavour of the discussions have been positive… Again, we’re sitting in the driver’s seat with the financial security we have.”

Councillors weren’t so upbeat. Lowry wondered if the template would give  Loyalist a “hammer” to ensure work be completed before winter. Thompson replied there is a 30-day clause that allows the township to give clear notice that it will take action if Windlectric doesn’t.

“We’re hoping we don’t have to use that, but it’s there. We have used it before and, if need be, we’ll use it again,” he said.

Deputy mayor Ric Bresee asked if the municipality has sufficient funds at hand to cover the deficiencies already listed. Thompson said it has an irrevocable letter of credit in its possession for an amount “that sufficiently exceeds the value of the work.”

Amherst Island councillor Duncan Ashley called the matter “simply a safety issue” and said he wanted to see the work completed before winter, regardless of who does the work.  He alluded to Green Energy Act restrictions and the fact council didn’t have much power while construction was ongoing.

“Everything should be done and it should be done now, as soon as possible. If we have that kind of hammer — and my understanding is the bond is of greater value — access it. Let’s find a company and let’s get going. Time was of the essence when they pushed us into these agreements. We weren’t allowed to wait or let the public get their concerns listened to, but the security is here and we finally have the hammer.”

Ashley invited any members of council who were not sure when to do the work to take a drive around the island to see if they find the conditions acceptable. He spoke of flooded basements  caused by ditching rendered ineffective and cars bottoming out when exiting their driveways onto roads.

“I believe we were told the road use agreement covers this. We have the benchmark set by the engineers we contracted to oversee the project. We know what the roads were like before, we know what happened to them during — we have substantial records to that effect — and their impact on the public,  and we know what they’re like now. I don’t think this gives us opportunity to abuse the funding or substantially improve the roads, they should just be restored to a safe condition.”

He also made a motion to engage a contractor by the fastest means possible to restore the roads. It was accepted unanimously.

Thompson indicated the letter which would start the 30-day process could be sent this week.

Le Lay and Ashley also pushed the municipality to publicly disclose the amount of the securities.

Director of planning and development services Murray Beckel said the amount is based on the full cost of works on public property, arrived in a pre-construction study conducted on behalf of Windlectric and vetted by the municipality as per the agreement and is “significant millions of dollars.”

Council passed a subsequent resolution to post the statement read by Lowry on its website and to include the figure if the township’s solicitor advises it may do so. Ashley indicated he would not support the motion, but in deference to council, he also would not divulge the figure.