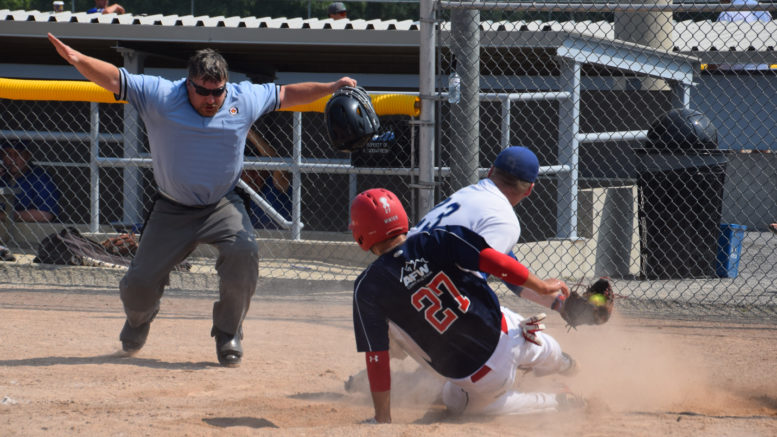 Ethan Winter of the Napanee AFW Express slides in safely to score on a passed ball. Photo by Adam Prudhomme.

A bit of risk and some heads up base running got the Napanee AFW Express going this morning against Nova Scotia’s Colchester Royals, helping the hosts to an 8-1 victory and a perfect 3-0 record at the U19 Men’s Canadian Fast Pitch Championship.

Ethan Winter got the Express on the board by working his way around the bases on three passed balls, coming in to score as the ball squirted just far enough away from the catcher for him to dash home from third. He slid in just under the tag of Royals’ pitcher David Watson. Brendan Hagerman singled on the next pitch to score a run and put the Express up 2-1.

The Royals answered back in the next inning after Cameron Patton led off on a double and went to third on an error. Rowan Sears drove him in with a deep sac fly. That was all Express starter Riley Manion would allow, going the distance with six innings pitched and eight strike outs.

The Express sealed the win with three runs in the fifth and sixth to win via the run rule. Hagerman finished the game with four RBI, going 3-4 at the plate. Tucker Firth drove in two runs while Finn Pierce had one RBI.

Napanee will look to stay unbeaten when they take on the Caledonia-Haldimand Athletics under the lights at 8 p.m. tonight at the Napanee Fairgrounds.