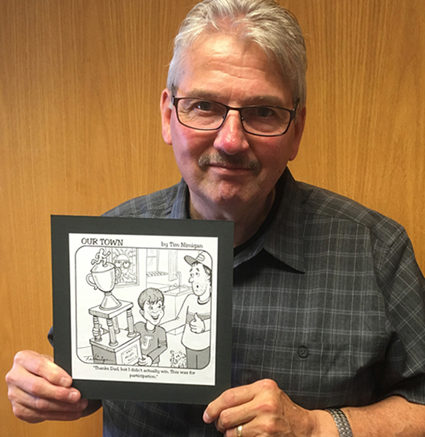 Beaver cartoonist Tim Nimigan shows off his winning entry in the 2018 Canadian Community Newspaper Awards, ‘The Winner Is...” Photo by Adam Bramburger.

And the winner is “The Winner Is…”

Napanee Beaver cartoonist Tim Nimigan discovered Monday he had won first place in the Canadian Community Newspaper Awards for best local cartoon in a newspaper with a circulation of 10,000-plus.

His winning entry depicts a young man proudly holding a giant trophy in front of his approving father with the punch line “Thanks Dad, but I didn’t actually win. This was for participation.”

The retired NDSS art teacher who has produced his “Our Town” cartoons in this newspaper every second week for 15 years said it typically takes him about three hours to finish his cartoon once he comes up with an idea. Sometimes that can be challenging. Other times, it can be instantaneous.

In this instance, Nimigan said he was drawing a family friend and his son, who is an accomplished runner who has won awards based on merit and while drawing, he reflected on the recent trend to award participation trophies for young participants in a variety of activities.

“It got me thinking about this whole participation thing that was so prevalent. Kids come home with trophies, but when I was a kid trophies were very hard to come by. That change in society is what I was looking at… I can see how people can relate to this.”

Nimigan said presentation can be a secret to one-framed cartoons and the delivery of the punch line can often make or break that. Getting the wording right is key.

“It takes some thinking about the caption and how to present it. It’s easy to get to the punch line in the first part instead of the last part. You want it to be at the end. That’s a little bit of art in itself.”

This year, he submitted three cartoons for the judges’ consideration. One  was of a fretting child with a book about cracking secret codes preparing to read a birthday card from his grandmother, addressed in cursive writing. Another featured an entrepreneurial young girl trying to capitalize on Canada’s 150th birthday by raising the price at her lemonade stand to $1.50.

“I thought if I placed with any of them, it would be that one,” he said. “Everyone was trying so desperately to fit into the Canada 150. That was her opportunity to fit in and be entrepreneurial as well.”

While one might read the winning cartoon about participation trophies to be a political statement,   Nimigan said he often doesn’t consider politics front of mind like most editorial cartoonists  — in fact, when he was first approached to do editorial cartoons for the Beaver in the 1970s, he actually shied away for fear of “lambasting people.”

Instead, Nimigan has focused on amusing small-town foibles. Sometimes, he said, political overtones are unavoidable.

“I’ve never done one on Trump or anything like that, but there’s some that come close to being political,” he said. “It’s a small town and we all get along reasonably well. While there may be things to be said, I’ll leave that to the letters to the editor and things like that. I want people’s days to be brighter because of my cartoon.”

Often, Nimigan says, he has people calling him to comment on his latest cartoons or stopping him in the streets to share a laugh or a thought.

Stylistically, he said his work has been inspired by Herman, the long-running Jim Unger creation.

“His ability to get an idea across in a single frame is what captivated my interest,” he said.

Nimigan also suggested his work isn’t necessarily “classical” cartoon style, but the judges reaffirmed his beliefs about cartooning with their decision.

“If my cartoon is funnier than someone else’s, I’d hope they would see that… and they did.”