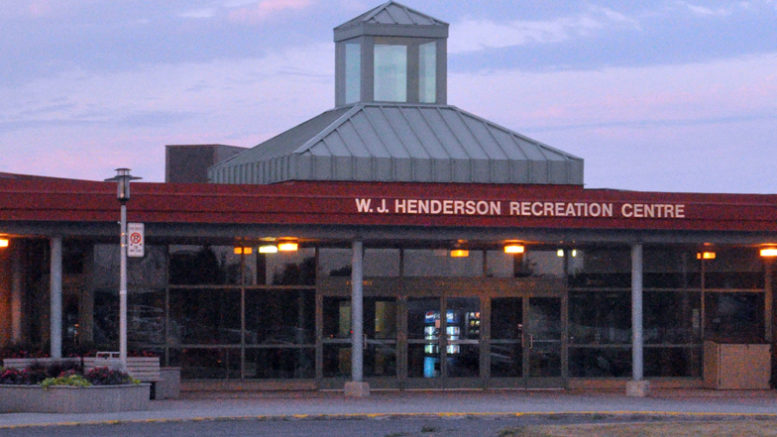 A plan to construct a new $14-million municipal building on the W.J. Henderson Recreation Centre grounds in Amherstview has been put on hold until Loyalist Township’s new council takes office.

On Monday evening, the township’s engineering manager Jenna Campbell was before council looking for approval to negotiate with architectural consultant MJMA to complete a feasibility study, conceptual design, and cost analysis for the project at a cost of $200,000 plus HST.

The firm was one of five invited to respond to a request for proposals issued last month for a vision of the site. The responses were scored based on price and technical criteria, including the township’s “triple bottom line” measuring social, environmental, and economic indicators. Its score — 115.4 out of 120 possible points — was 23 points higher than the other finalists.

“We felt their project vision best aligned with that we think the township’s goals are for this project,” Campbell said.

Campbell said the direction to proceed came from a July 2017 motion approved by council that would see a feasibility study prepared for an integrated concept at the W.J. Henderson site including a new municipal office and facilities proposed in the township’s recreation master plan.

The recreation master plan seeks to offer critical infrastructure improvements at the centre, including work to address inefficiencies with the indoor pool, such as water leaks, ventilation issues, and an obsolete filtration unit. Other improvements would address operating efficiencies, such as heating, and accessibility by way of an elevator and family change rooms.

Then, by 2023, the plan calls for an expansion to the W.J. Henderson Recreation Centre, calling for an addition of a double gymnasium with a track, a therapeutic pool, fitness rooms, multi-purpose rooms, and other amenities.

Campbell said staff divided the process into three segments. The first, covered by the $200,000, is the feasibility study, integrated design, and cost estimate for both the initial $14-million project — the municipal building and  infrastructure improvements to the existing recreation centre  — as well as the recreation centre expansion —  was to be completed this October.

The second and third phases, detailed drawings and construction administration for just the initial phase, were scheduled to be completed by April 2019 and the end of 2019 respectively. Meanwhile, any consideration on the recreation centre expansion timelines would be at council’s direction.

According to Campbell, the idea to build the new municipal building comes as the current Odessa municipal building is overcrowded, having reached its peak capacity five years ago. It attempts to twin that need with the realization that infrastructure must be updated at the recreation centre to extend pool life.

The new building is expected to be 1,800 square meters as opposed to the 1,250 square meters of the current building. It was suggested that additional space would address overcrowding and meet growth needs for 25 years.

A wrinkle in the timeline and planning is a request from Lennox and Addington County to accommodate a daycare and social services space within the community hub.

“Their funding requires that portion of the new build to be built and operational by Dec. 2020. In order to incorporate day care into the community hub, that’s what’s driving the schedule at this point,” she said.

Members of council appeared uneasy to move forward with the project, however. Deputy mayor Ric Bresee said he viewed the July 2017 motion as “a review of the potentials, not a decision on location.” He felt that council’s direction had been an indication its as open to exploring the location, but not an approval.

“The recommendations that have come before council tonight, I believe, are premature. We are two weeks away from being in a lame duck position. This report was published on the weekend without an opportunity for the public to come forward with any concerns related to the report,” she said.

“I believe a motion is in order and appropriate that this report be deferred until after Dec. 1 to allow the new council to deal with this and make the decisions. It’s an extraordinary amount of money and I don’t believe this council as the term is coming to a close should be making this decision.”

Bresee seconded the motion to defer. It passed 4-1 with Mayor Bill Lowry the lone dissenter.