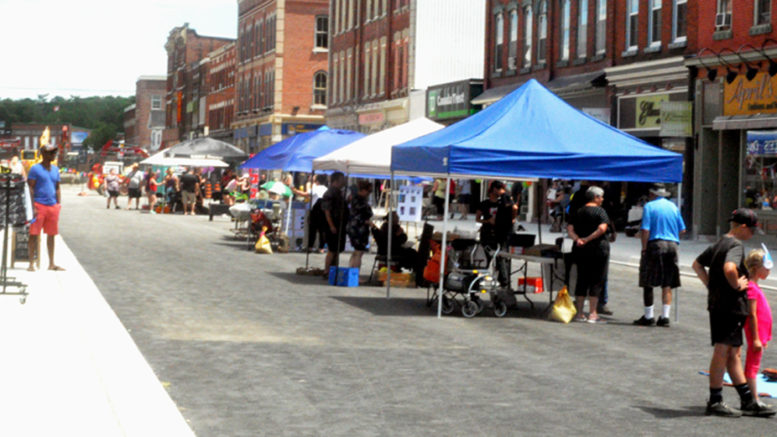 There was plenty to see and experience as the Napanee BIA held a street fair to mark the reopening of the first phase of this summer’s Dundas Street reconstruction work. Sidewalk sales, live demonstrations, games, music and information booths greeted potential shoppers visiting the downtown core. Photo by Adam Bramburger.

With the heavy machinery rolled away to reveal wide, clean sidewalks and an open roadway from Centre Street to John Street, it was time for celebration Saturday.

Along the edges of Dundas Street, merchants rejoiced in being able to freely attract customers with their wares. In the middle of the street, there was dance, games, food, and information at the ready during the This Street Cares festival.

Kärin Zätterberg, a summer student working with the Napanee BIA, said the event appeared to be well received by downtown businesses.

“People were really pleased with how busy their shops were,” she said.

Zätterberg noted that Napanee Blooms cut 250 roses to hand out for free and they ended up cutting an extra 50 to meet demand.

“Businesses found it was a great turnout,” she said.

Jefta Monster, of Starlet, backed up that sentiment as he said his store was busy throughout the day. He told the Beaver that even during construction, however,  traffic downtown was better than he anticipated, perhaps with people making special trips to support stores. That said, he was happy to see the construction substantially completed.

Just in front of his store, a painter honed his craft and dancers from Dance Xtreme put on a show.

Between the dancers and giant checkers and bowling games offered by the Napanee library, there was plenty to see on the street.

“It’s been fairly steady,” she said. “That community outreach is important… A lot of times people will be walking along and they’ll walk up and to you and say ‘Oh yeah,  I remember what you do.” They like to talk to a person directly.”

“I think people really enjoyed having a grand opening for the street and seeing the work that had been put into it and seeing how well it turned out,” she said. “It ended up working really well and the weather was amazing.”

She also noted there was some nice synergy with the Hometown Market with visitors going back and forth between the two events.

According to  Zätterberg, the BIA is contemplating future events as phases of Dundas Street further east are completed later this summer. It is soliciting ideas from the public and business owners for activities.

Zätterberg said she also received a lot of positive comments to pass onto Barr Construction, both from businesses and the public, for the work it is doing on the reconstruction effort.