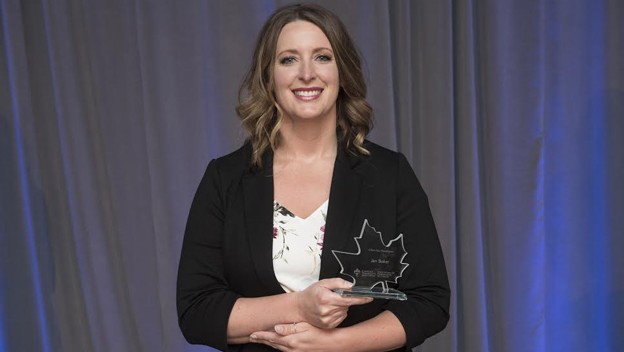 Jen Baker was named new practitioner of the year by the Canadian Pharmacists Association earlier this month at a convention in Fredericton, N.B.(Stephen MacGillivray Photography)

A Stone Mills resident recently named new practitioner of the year by the Canadian Pharmacists Association is determined to find ways for her peers to serve patients better.

Not even five years into her career, Jen Baker is the vice-chair of the Ontario Pharmacists Association, where she advocates for the province’s pharmacists and pharmacy technicians to play an expanded role in health-care service delivery to provide better value for patients.

Baker said early in her career and through her education at the University of Toronto, she was able to work with some giving pharmacists who mentored her and taught the importance of advocacy for the profession, for herself, and for her patients. Their support convinced her to put her passion into the field.

“I think the reason I went into pharmacy was to help people and through the exposure I’ve had to the profession, I see there is a lot of opportunity to do more,” she said. “I might not be able to touch every patient life out there, but if I can help all the other pharmacists out there to do a little bit more, or I can contribute to that in some way, it’s an amazing way to help more people than my practice can touch.”

As a young pharmacist entering a profession with a tough job market to crack, Baker has found she’s had to take on a breadth of roles. Baker is a casual pharmacist at Lennox and Addington County General Hospital. She did a placement there in spring 2013 after moving to the area for her husband’s work and found she liked the community feel there. She connected with the members of the small department and has been attached ever since. This summer, she’ll be in the hospital to cover for pharmacists’ vacations.

She has worked regularly at a Kingston pharmacy, specializing in travel medication and palliative care. Recently, she has taken on full-time role as director of pharmacy excellence at a company called Whole Health Pharmacy Partners. Baker explains the group supports independent pharmacy owners with best practices.

“We’re helping to ensure the professional services they’re offering are sustainable, modern, and what people in their communities need in order to get value from their pharmacies,” she said.

By having that varied experience, Baker said she’s provider herself some options for a 40-year career. She said she’d like to stay on with the hospital for some time and would like to push the boundaries of retail pharmacy. The key, she said, is being able to be flexible and open to change.

A big difference is in what pharmacists are being allowed to do. In the past five years, pharmacists have been given the ability to offer flu shots. Last year, over a million Ontario residents immunized. Given the success, they’ve also been allowed to administer travel vaccines. Baker says she can see potential for pharmacists to offer any kind of immunization available, whether it is publicly funded or not.

“We’re looking for ways to expand what we do to offer more convenience while offering a cost-effective solution for the government,” she said. “The population is getting older and we know we’re going to be using more health resources. We have to focus on efficiency.”

One such way of achieving that is by allowing pharmacists to treat common ailments. Baker explains that if someone had an infection like pink eye, a urinary tract infection, or a rash like poison ivy, a pharmacist could prescribe common drugs to match the symptoms. She said they’re trained to do so. Having worked alongside hospital emergency doctors, she also understands the benefit well.

“It doesn’t make sense for somebody to be sitting in an emergency room waiting. There are better ways of using resources we have and creating capacity,” she said.

Baker said she’s also advocating for service delivery to be patient driven, rather than focused on product. She said through counselling and early intervention, pharmacists can help with strategies for pain management that may limit reliance on opioids or keep patients from returning to doctors for medicine-related issues.

Baker was also recognized as the Ontario Pharmacists Association new practitioner of the year in 2015. She said it has meant a lot to be recognized by her peers.

“This is proof you don’t need to go with just one career option to find fulfillment and success in a profession. It validates some of the things I’ve tried to do for my patients,” she said. “Ultimately, it’s a great honour. To be recognized by my peers and to see the other winners and think I’d be in that same realm is very humbling.”