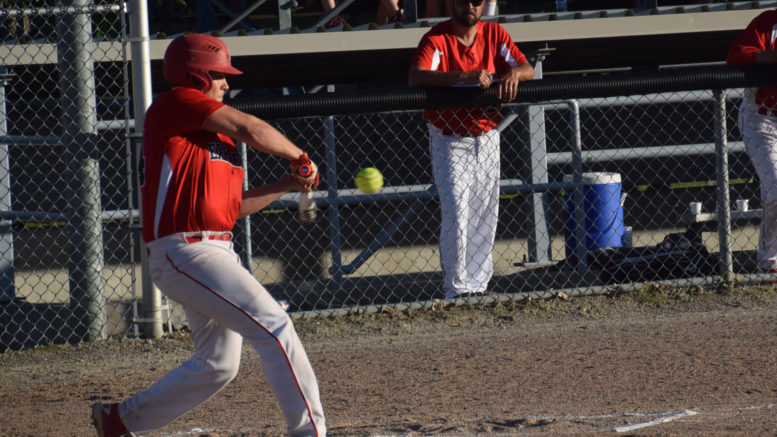 Kael Fredenburgh of the Napanee AFW Construction U19 Express connects for a two run triple against the Oshawa BBs during the opening game of the OASA U19 Eliminations, held in Napanee this weekend. Teams were playing for the right to represent Ontario at the U19 Fast Pitch Championship, which will be held in Napanee in August. Photo by Adam Prudhomme.

The host AFW Construction Napanee Express saw their stay at the OASA Eliminations come to a close a little sooner than they likely expected, losing 5-2 to Belmore on Sunday morning.

Ordinarily that would have meant the reigning silver medalists would have failed to qualify for Nationals. Fortunately for them they’ll be hosting the U19 Men’s Canadian Championship, so they were granted automatic admission to the tournament before the eliminations even began. They’ll now have a little over a month to right the ship before the games really start to count.

Napanee began the tournament on a high note on Friday as Riley Manion pitched four no-hit innings in a 10-0 win over the Oshawa BBs.

Finn Pearce helped pace the offense with a pair of hits. 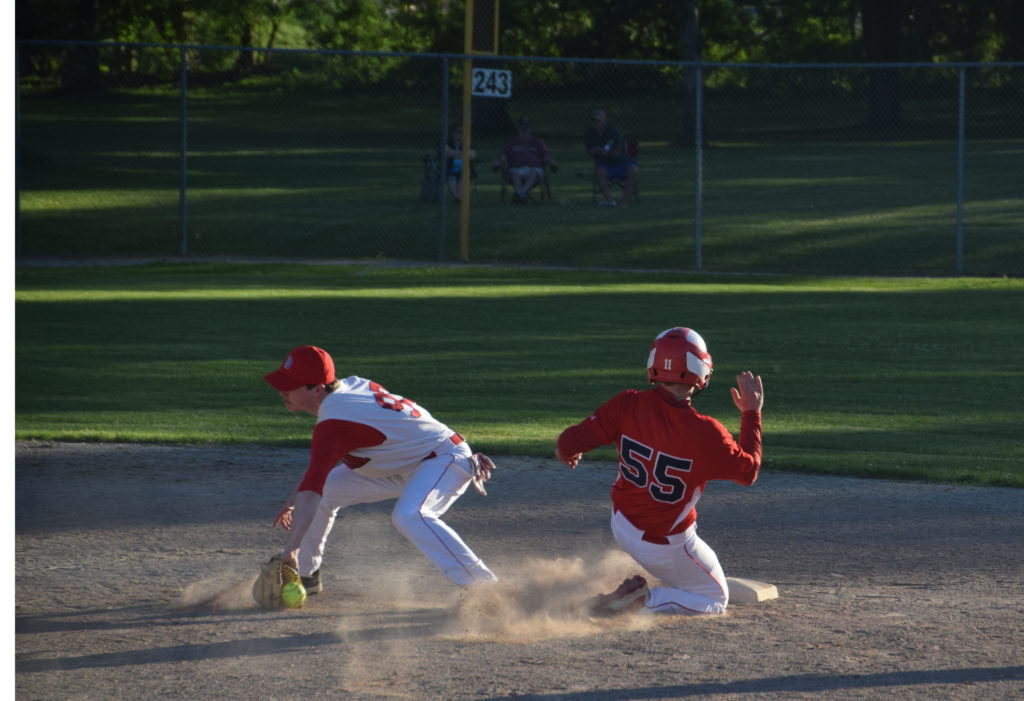 Napanee was an out away from going 2-0 at the tournament on Saturday afternoon and advancing to the finals before Manion gave up a two-out, three run walk-off homer to Caledonia to fall 3-2.

Manion had been nearly untouchable before the seventh inning, striking out 13 batters through seven innings.

The Express were able to bounce back and stave off elimination later that evening with a 2-0 win over Ivanhoe to keep their hopes alive in the double-knockout tournament. They then had to win three straight if they were to clinch a first place finish.

They were a win away from qualifying for the finals before they fell 5-2 to Belmore on Sunday morning to end their tournament run.

Caledonia went on to top Belmore 4-3 in the finals. Both those teams have now qualified to represent Ontario at this year’s Nationals.

The Express weren’t the only pre-tournament powerhouse favourite to suffer an upset as the reigning National champion Chepstow team was knocked off by Ivanhoe on Saturday afternoon. They had opened the tournament with a 13-1 win over Ennismore before Tavistock upset them 9-8 to put them on the brink. They responded with a 9-0 win over Tara but were dispatched in their next game, well before Sunday’s medal rounds.

The Express will look to iron out the kinks ahead of Nationals as they return to league play ahead of the big tournament, which runs Aug. 14 to 19 at the Napanee Fairgrounds.

The Fairgrounds will once again be bustling with softball activity this weekend it plays host to the Softball Napanee Invitational for the U14 and U16 levels on Saturday and Sunday.