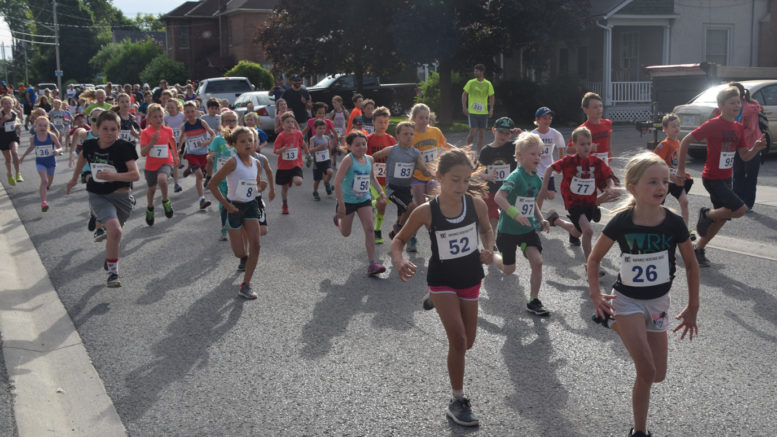 Nearly 100 runners aged 12 and under ran the 1 mile course in this year's Napanee Heritage Race. Photo by Adam Prudhomme.

A pair of course records were toppled at this year’s Napanee Heritage 5K Race this year.

Kingston’s Allison Alexander set the course record for females with a time of 19:33.12, besting the old mark of 21:09, set by Charlotte Dorey.

As it had the previous two years, the event opened with the Kids One Miler.

“We had 96 kids complete the miler,” said Heather Griffin, one of the event organizers. “We had participants as young as three years old (up to 12 years). The miler is one of our favourite parts of the event because it creates a whole family atmosphere. We have lots of kids who run the mile and parents or relatives who run the 5K. It’s definitely a highlight for us.”

There was also some runners aged 10 and under who took on the 5K. The top finisher in that category was Napanee’s Jack Gregory, age nine, who finished at 19:52.50 which was good for 14th overall. Nathaniel Stacey, age eight from Camden East, was second in the 10 and under and 24th overall with a time of 21:51.97.

“Finishing a 5K at that age especially that quickly, takes a lot of mental strength,” said Griffin.

Organizers were pleased to see not only plenty of local runners registered, but also some from the surrounding Kingston area as well. They took that as a sign the race was beginning to put Napanee on the map in terms of running events in the region.

Both the 1K and 5K departed from the Lennox and Addington County Museum and Archives, with the 5K designed to take runners passed some of the historic sites of Napanee. As always, all money raised from the registration fees will be donated to a local cause that helps promote fitness, in this case Seniors Outreach Services.

“We had some participants from that (SOS) organization who completed the run and they did it with these Nordic walking poles which was neat,” said Griffin. “That’s another thing we enjoy at our event, we can have an elite runner like Carter then you also have these ladies with a passion for Nordic walking that are completing the course at their own pace and hopefully with just as much enjoyment.”

Several racers were in their 60s with a 74-year-old among those who completed the course.

The money was still being tabulated from the weekend with a formal cheque presentation expected in the coming weeks. In 2016 they were able to donate $15,000 to the Rotary Club of Napanee in support of the new park located at the splash pad and last year they gave $12,500 to NDSS to help kick start the revitalization of their track, which is scheduled to be completed later this summer.

A full list of race results can be found at www.NapaneeHeritageRace.com.