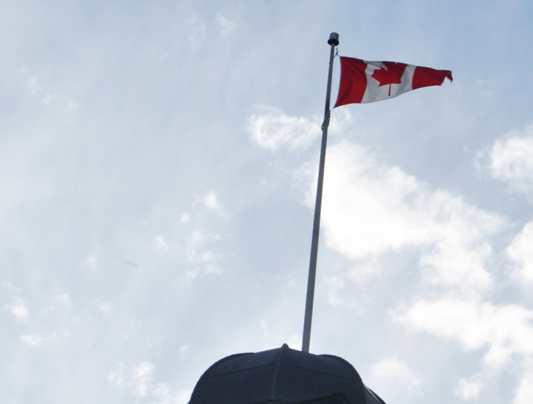 Last week, Lennox and Addington County adopted a policy on the flying of flags on its property. (Adam Bramburger/Staff)

Lennox and Addington County now has official policy surrounding the flying of flags at its buildings.

At Wednesday’s working session meeting, councillors received a draft policy in a report by clerk Tracey McKenzie, responding to an April resolution that sought direction on the issue.

Two months ago, following an incident in Toronto that saw a driver pull his van onto a sidewalk on Yonge Street and kill nine pedestrians, while wounding another 15, councillor Gore Schermerhorn asked if the County had any policy for the lowering of flags in times of mourning. Hearing it didn’t, he moved that one be adopted.

“We looked around, took some best practices from other places, and tried to find the circumstances that applied to us here,” McKenzie said. “In the end, it could be by resolution of council or direction of the warden. We put that in just in case it’s a timing thing and there’s not a meeting of council in good time that we’d be able to decide.”

The new policy suggests that flags on Count property must be flown at half-staff following the death of: the Sovereign or a member of the royal family related in the first degree; a past or current prime minister; the Governor General; a local member of parliament; the Premier or Lieutenant Governor of Ontario; a local member of provincial parliament; a past or current Warden of Lennox and Addington County; a current member of County council; a current employee of Lennox and Addington County (with the flag lowered at his or her worksite); and a paramedic firefighter, or police officer killed in the line of duty (at ambulance bases).

It says the flag may also be at half-staff on Remembrance Day, as the result of a resolution passed at a County council meeting, or at the warden’s direction.

Councillor John Wise asked if the policy included information about flying flags other than the Canadian flag or the Ontario flag on Lennox and Addington property. McKenzie said the policy indicates that “No other flags will be flown on a permanent or temporary basis.”

The policy also follows Heritage Canada’s “Rules for flying the National Flag of Canada” and requires flags that aren’t in a suitable condition for use be replaced and disposed of in a dignified manner.