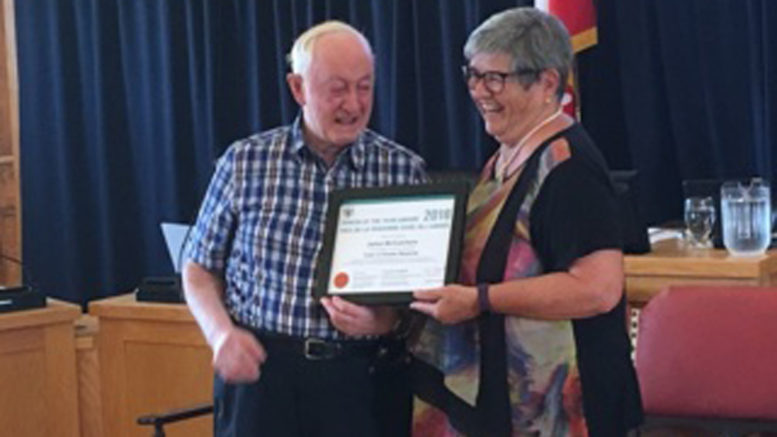 Jim McCutcheon attended last Tuesday’s council meeting under the pretence that his fellow Rotarians were going to be recognized by council for their great work in the community.

What he didn’t know however was he was actually the guest of honour. The invite was nothing but a ruse so that Greater Napanee deputy mayor Marg Isbester could present him with the 2018 Senior of the Year award.

Reading from a nomination letter written by Chris Seeley, Isbester highlighted McCutheon’s many contributions to the community, from volunteering at the Roblin Holiness Camp, ushering at church, performing music for patients in the hospital or nursing homes and the work he does through the Napanee Rotary Club.

“Jim has long been a member of (Rotary),” said Isbester, reading for the letter. “He is in charge of getting us our guest speaker for each meeting. Jim serves on our sick and visiting committee. Jim is our photographer at meetings and events.  Jim is our top salesman for our annual cash calendars and Jim organized our gospel sing. Jim is an example of a terrific Rotarian.”

This marked the second year that town has handed out a Senior of the Year award, which calls on residents to nominate someone they feel is deserving.

“Jim presents as an ever friendly, giving person who enjoys our Greater Napanee community and heals through his music and activities,” said Isbester.

-Councillor Mike Schenk skipped the rep tape and made a successful motion to install two signs that would denote the speed limit on  Salmon River Road as 60 km per hour.

Schenk made the motion after hearing a deputation from Salmon River Road resident Ed McCaig.

He presented a six-minute video detailing what he considered the dangers of the road, which currently has no speed limit posted. By Ontario law, a road with no sign posted is automatically considered an 80 km road. McCaig successfully argued that the narrow road, blind curves and high traffic of farmers, cyclists, and walkers made for a potentially dangerous situation if cars were allowed to go 80 km. He also noted he had signatures from all but one resident supporting the notion of lowering the speed limit on the road.

Upon the conclusion of the presentation, council discussed following their standard procedure for lowering a speed zone-requesting a study and consulting with the OPP. Schenk noted that it would probably be cheaper to just install the signs and go from there, to which council agreed.

-The Town of Greater Napanee’s website earned an honourable mention from the Hermes Creative Awards competition.

The compliment was directed to the town’s new responsive and accessible website, which was launched in October of last year with help from the website provider eSolutions.