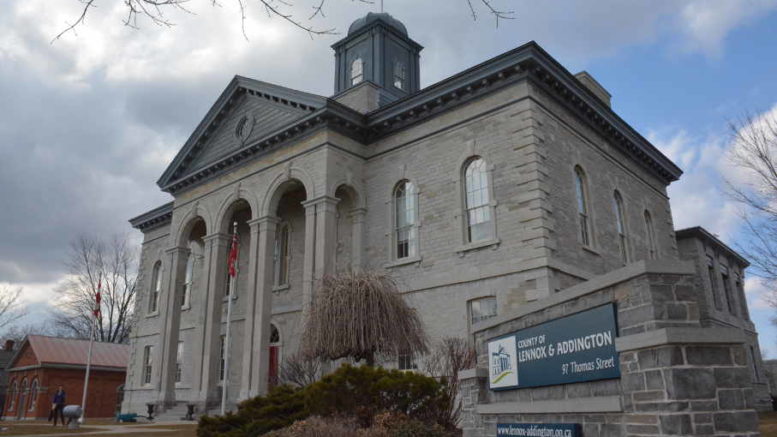 Lennox and Addington looks to federal, provincial levels for help

News that a zoning conflict may push a group of people living in trailers on Dairy Avenue to the streets has underscored Lennox and Addington County’s lack of affordable and social housing stock and prompted calls for upper-level government intervention.

She told councillors PELASS had struck a task force that will meet Friday or Monday to address the trailer arrangement and the immediate needs of its residents. Also managers and case workers have already started to identify if any residents are on Ontario Works or Ontario Disability Support Pension (ODSP) caseloads.

Ferguson told councillors even the $450 Drader said he was charging for use of the trailers would put a number of people on social assistance or pensions in a tight bind. Ferguson also said participants in the recent homelessness enumeration are largely Ontario Works and ODSP clients, with 60 of 68 people in southern Lennox and Addington claiming they are involved in either of the programs. Complicating matters, 53 per cent of respondents said they were without stable housing due to conflict or abuse involving a partner, 28 per cent indicated they were homeless due to an addiction, and 35 per cent reported being incarcerated in the past year.

To address precarious housing, Lennox and Addington County has started a pilot project where two social housing units were converted emergency shelter units. One became available in March, the other this month. So far, the spaces have never been vacant. Most individuals staying in the emergency shelter for the 21 day maximum and have not found suitable permanent housing.

The County has also applied for $100,000 in provincial Innovation, Evidence, and Capacity funding in order to develop an affordable housing expansion model for rural communities. While news of the funding is still outstanding, PELASS was recently successful in getting the Eastern Ontario Warden’s Caucus to form a working group with the hopes that similar rural municipalities with housing problems will support the PELASS proposal and push for a rural-friendly model to fund affordable housing.

While those initiatives move forward, PELASS is left to use the tools it has to address homelessness — and those tools are stretched to the limit. Where it can, PELASS offers rent subsidies to help clients afford market rents, it offers rent-geared-to-income units through the local housing corporation, and has the ability to offer emergency and eviction prevention funds.

According to Ferguson, there’s also a real need to revitalize the stock of supported social housing.

“Our housing waitlist, as of June 1, was at 541. Year over year, we’ve certainly seen growth in our waitlist and that includes our six not-for-profit partners,” she said. “In 2017, we were able to support 100 households on the list — that’s about 20 per cent of the individuals on the waitlist at that time. This year… of the 541 people on that list, as of June, we’ve been able to support 25 people moving into some type of assisted housing. That represents about 10 per cent of our waitlist. Our ability to accommodate people is decreasing.”

Councillor Gord Schermerhorn wondered aloud what the solution might be if all the housing is full. Ferguson was direct in her reply.

“That’s where the rubber meets the road. The reality is we don’t have enough housing stock to be able to house everyone in an affordable situation,” she said. “The meeting on Monday or Friday is going to be a really challenging one because the reality is if there were solutions in the community, we at social services as well as our community partners like Morningstar Mission or Peer 17, we would have been linking people with those solutions already.”

Councillor Marg Isbester agreed “it’s not going to be an easy fix,” but said she believes the Dairy Road incident is forcing the County to consider options. Isbester suggested that maybe municipalities have to look at new ways of providing affordable housing. She called on PELASS to include local organizations that deal with the root causes and the effects of poverty at the table as they might have innovative solutions that might not have been tried.

“I certainly have organizations I’d like to recommend sit around the table and I hope the other municipalities do the same thing. This isn’t just in Napanee, but that’s where the light is shining now,” she said. “The whole point is those agencies that work around the issue will have it on the table, and that at least gives them a chance to alleviate pressures on the work they do. I know they can’t come up with policy, but some of them have fairly inventive things that (won’t) cost us money.”

Schermerhorn said, ultimately, money is going to be make the difference and municipalities just don’t have it.

“The housing, I feel is a federal and provincial problem,” he said. “We can get as many agencies as we want to but it comes down to money.”

He said it appears to be a growing problem and at some point, government has to recognize that and take action. Schermerhorn moved that council write to newly elected MPP Daryl Kramp and the Eastern Ontario Warden’s Caucus to alert them of the problem. An amendment added MP Mike Bossio to the correspondence as well.

“It comes down to a financial commitment. We have to have the province and whoever else on board for that. We should be making the province aware.We’re a small county. We’re a small town. We certainly can’t afford to do the social housing (alone),” Schermerhorn said. His motion ultimately passed unanimously.

There was some talk about repurposing existing social housing stock or finding funding to direct to new builds. Chief administrative officer Brenda Orchard said that in the future, the County should look at building more high-density solutions, such as dormitory-style housing. Councillors suggested the idea of building is problematic.

“This is one place where the market economy does not work very well. It’s in the interest of developers to maintain a slight shortage of supply. If you have an oversupply, the value of your asset goes down in sales and in terms of rental income,” said Wise. “When you talk about basic human needs, it’s food and shelter, basically. As farmers, we always oversupply, we’re notorious for it, at least in our part of the world. Housing is in the hands of very few people: developers. It’s not in their interest to be producing them.”

“If we’re going to supply social housing for people, it is going to have to come from the government coffers. The private developer is not going to do it. That’s just plain and simple. If the laws change or something like that, then the private developer might do something, but not today he’s not.”

Wise suggested that leaves council to either build units itself or change the regulatory framework to require developers to build a certain percentage of affordable housing.

Ferguson agreed the councillors made a salient point. She said PELASS has had funding available for developers to build affordable units in recent years, but it had difficulty getting any uptake in Lennox and Addington. She said most developers don’t think the cost per unit is adequate and most aren’t willing to lock in rents below market value for 15-20 years as most funding agreements require.

While Warden Bill Lowry recognized the need to help the people affected on Dairy Avenue and others who participated in PELASS’ recent homelessness enumeration immediately, he also suggested officials at all levels of government can counter the problem over the long term by address root causes of poverty or social strife through education, skills training, and mental health supports.

“What are we doing wrong? Why is this happening?” Lowry asked. “What are we doing to help this situation, rather than facing this overflow of need, need, need? As far as I’m concerned we’ll never be at 100-per-cent satisfaction. It’s just going to grow. I don’t see it getting better, other than trying to identify and address some of these situations.”