Barefoot water skiers Brem Allen and Becky Moynes Meyer entertained the Riverfront Festival audience with some tricks on the river Saturday. The world-class Canadian competitors were promoting the 2018 World Barefoot Waterski Championship, which will be held in Selby this August. Photo by Adam Bramburger.

For generations, the Napanee River has been central to life in this community.

From sawmills and grist mills in the late 1700s, to a plentiful fishery, to Gibbard Furniture harnessing the power of its waterfalls it has provided economic prosperity. It has also served as a gateway for visitors and a play area for many to pursue recreational opportunities of their choosing.

On Friday and Saturday, the Town of Greater Napanee marked its fifth year of celebrating that fact at the annual Riverfront Festival. Hundreds of people congregated around Conservation Park to share I the enjoyment of the waterway and the community that has grown up around it.

“Did I tell you we are having a party?” Cortwright Christian exclaimed enthusiastically while opening the town’s 16th Multicultural Festival at the pavilion, Saturday. It has become a part of the festivities. “We are going to celebrate 20 years of the amalgamation of Greater Napanee. We have cake and ice cream, we have line dancing, we have so many things to do. Make sure you’re here to have a great time.”

By that time, the party was very much under way. Friday evening, hundreds of people brought their lawn chairs to the park as they sang and danced the night away as The Reasons offered live renditions of popular hits of the 1960s, 1970s, and 1980s.  The Price Brothers, an Oakville-based cover band followed them with a set of more modern music capably performed in a difficult segue from the classics. 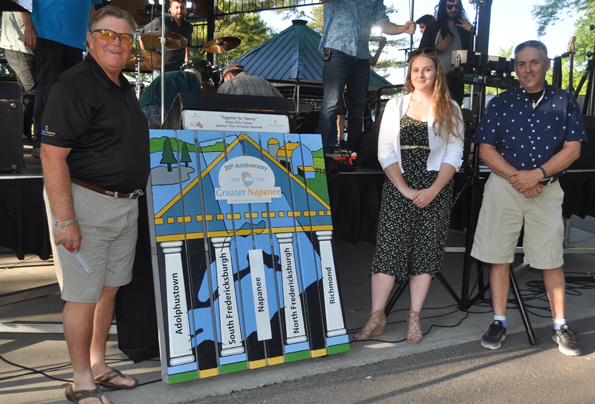 Amid that concert, the town formally marked its 20th anniversary with the latest installment of its pallet art project. Artist Ellie Callery helped Mayor Gord Schermerhorn unveil her depiction of five pillars — former townships Richmond, Adolphustown, North Fredericksburgh, South Fredericksburgh, and Napanee forming a stable structure together above a map, a watery scene, and a barn representing its agricultural roots.

The festival’s emcee Tim Nimigan explained the piece is part of 20 in the first phase of the art project that will be followed by an additional 10 over the next year.

Schermerhorn, who noted the festival would likely be one of his final opportunities to speak on behalf of the municipality, said the town takes great pride in its waterfront and what it provides. 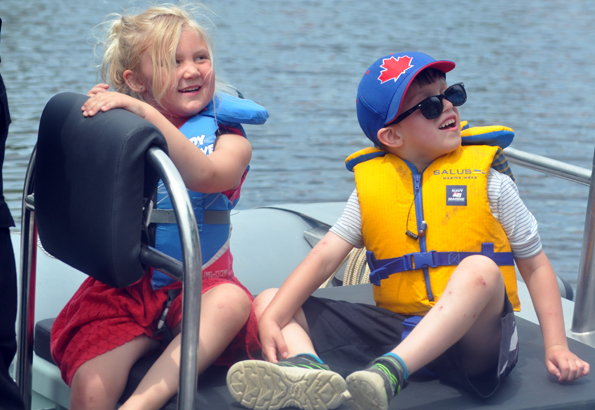 Addison Atherton and Daniel Garrett Atherton took a break from dancing at the Multicultural Festival to ride on a Navy vessel their dad was piloting.

The next morning, it was high tide — not the rare phenomena in the river itself — but in activity. As horse-drawn carriages brought people to Conservation Park from downtown, the Centre Street bridge was lined with spectators hoping to see rooster tails from the Ontario Power Boating Association demos taking place on the water. Along the same bridge later, Canadian barefoot waterskiing champion Brem Allen garnered some “oohs” and “aahs” as he jumped off the bridge and allowed himself to be pulled down the river. He and Belleville-area skier Becky Moynes Meyer (who placed fourth herself at worlds last year) delighted with some skills on the water in promotion of the upcoming world championships in Selby.

All day long, the water was active as there were paddle boating and canoeing demonstrations, a canoe tug-of-war pitting town staff against Royal Canadian Navy reserve personnel, and one of the most popular ideas of the day, a ride on a small naval vessel, courtesy of the HMCS Cataraqui crew. Off the water, there was also plenty to do.

The Greater Napanee firefighters held a free pancake breakfast, there was a local authors’ showcase at the Napanee Library, and Hometown Market vendors offered a wide range of handcrafted goods and goodies. A children’s area also offered facepainting and bouncy castles — and it was close by the splash pad in Rotary Park, a must when the sun got hot.

No one had to leave the party, either, as the festival featured barbecues from the Napanee Lions Club and Morningstar Mission and an array of international delights, including Syrian food that Christian said he was trying to get at the festival for the past two years. Back at the pavilion, an eclectic mix of performers shared the stage throughout the day, giving a taste of Irish, Scottish, Chinese, Caribbean, and Mohawk cultures. The Oshawa Hummingbird Club Carib Players were again a hit with their colourful costuming and their cool steel drum sounds.

Children, like Addison Atherton, 4, and Daniel Garrett Atherton, 6, who were enjoying the festival while their dad was conducting the boat rides, joined right in with the performers and danced along as several festival goers encouraged them. Christian said they looked like the had dancing in their future.

Tony O’Loughlin, of the Kingston Irish Folk Club, has been bringing groups to the Napanee Multicultural Festival since its inception. He said the local festival is a great place to bring young performers because they feel encouraged and included

“It’s a very safe place and people are supportive here,” he said.

O’Loughlin told some difficult stories of the plight of Irish settlers in this area. He talked about the Irish workers that did much of the grunt work in building the Rideau Canal and spoke of mass graves in the Kingston area. He said it’s important to share culture not only to entertain, but also to educate. 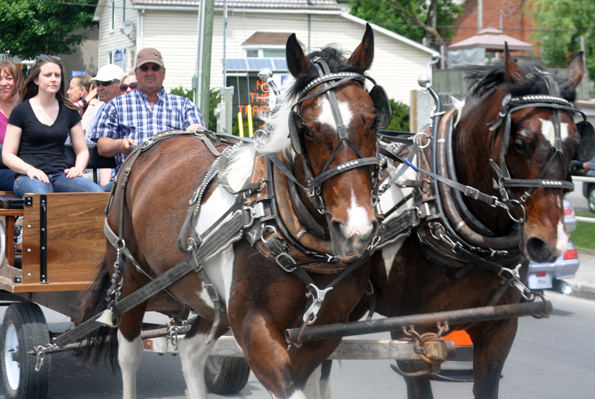 Deputy-mayor Marg Isbester said she’s pleased the Multicultural Festival has continued and has fit nicely with the Riverfront Festival celebration.

“Sometimes we aren’t as exposed as perhaps the larger areas might be to the diversities of people, and of menus, and of cultures. To make this a good place to live, we have to have that exposure so that we understand and respect and love each other.”