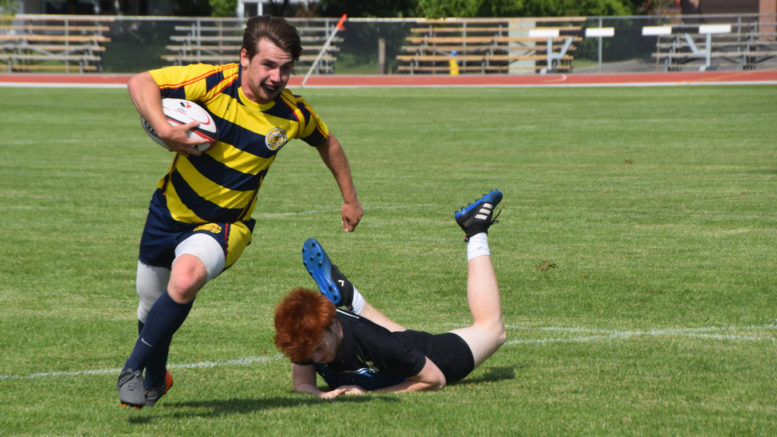 A shootout kick was all that came between the NDSS Golden Hawks senior boys rugby team and medaling at the OFSAA AA championship at Mary Anne Sills Park in Belleville last week.

After battling their opponents from Asbury    College to a scoreless draw in regulation, the game went to penalty kicks shootout, with each team trading attempts to boot the ball through the goalposts. Asbury College edged the Hawks 2-1 in kicks to end their run at a medal.

Fourth-ranked NDSS opened the tournament on Thursday with a 32-10 win over 13th rank Eden High School.

Zack Wheeler had three tries while Kiel Benton, Corbin Gibson and Craig Luery each had one.

That win marked just the second time in at least a decade that a boys’ Golden Hawks rugby team had won their opening game at OFSAA.

“We didn’t expect to get a fourth seed,” Hawks head coach Jim McKinney said of his team, noting they finished third at KASSAA. “Our local rugby is top cheese. It’s very strong when third place in our region gets the fourth seed then actually showed during the competition that we deserved it. That illustrates how strong our KASSAA is for rugby.”

Despite stellar defence in their second game, they weren’t able to advance to the round. They closed out the tournament with a 33-21 victory over Streetsville Secondary School in a friendly match.

“It’s not very often you win your last game at OFSAA and go home without a medal, but that’s what we did,” said McKinney. “Essentially we were 2-0-1 in full time and didn’t really lose a game, lost in kicks. We were very pleased.”

McKinney says he expects a large number of players to return next year as they look to improve upon their strong season.