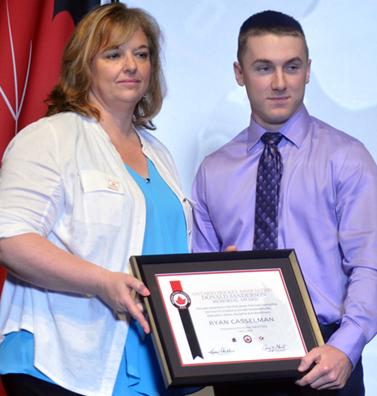 Dahna Sanderson presents Ryan Casselman the Donald Sanderson Memorial Award in memory of her son at the Hockey Hall of Fame in Toronto Friday afternoon. Photo by Adam Bramburger.

Just steps from the great hall where the Stanley Cup resides and the names of hockey’s greatest stars are on permanent display, Napanee’s Ryan Casselman stepped into the spotlight Friday.

In front of a supportive family contingent, the renowned Raider was recognized at the Hockey Hall of Fame with the Ontario Hockey Association’s Donald Sanderson Memorial Award. The award, which comes with a $1,000 bursary is given annually to just one player among all those skating on the 117 teams at the senior and junior levels within the organization.

Dahna Sanderson, the mother of former Raider Don Sanderson, who passed away in 2008 after injuring his head in an on-ice fall, introduced Casselman and presented him the award that goes to a player representing the desire, discipline, deportment, and dedication that guided her own son.

Sanderson spoke about how Casselman’s career came full circle back to the Raiders after three good Junior A seasons. She discussed how he led the Provincial Junior Hockey League in scoring with 117 points last season and how his game-tying goal helped the Cobourg Cougars to the 2017 RBC Cup national Junior A championship. She also talked about a hard time for the hockey prodigy when a coaching change meant his scholarship to Niagara University was rescinded.

“He took the experience as a life lesson and decided he’d like to be back in his hometown, close to family. He also decided to opt for a more practical education and chose a hands-on electrical engineering program at St. Lawrence College.”

“So far, he’s made the transition to college life very smoothly and successfully, maintaining a high-80s average while committing to play with the Raiders, affiliate in Cobourg, and work part time. That’s a pretty busy schedule, but he didn’t miss a practice or a team function all season.”

Sanderson called Casselman a highly skilled player, dedicated to his sport and community.

“He has the discipline to balance hockey, school, work, and other commitments. He has a strong desire to succeed and he doesn’t left life’s lessons slow him down. Instead, he uses them as motivation,” she said. “His behaviour, on and off the ice, is befitting of the honour.”

After receiving the award, Casselman had some continued stage time as the event’s energetic and rambunctious emcee, former TSN host Steve Kouleas, interviewed him. Their banter included the value of the award, Casselman’s description of his RBC Cup-tying goal in Cobourg, and his future. Kouleas concluded the talk by asking his interviewee if he would like to be involved in hockey his entire life and if he might pass on his experiences to future generations of players through coaching.

Casselman, who has one year of eligibility left with the Raiders, said the idea does interest him.

“Definitely, I think coaching is ahead in my life. I’d like to start here within the next couple years and see where it takes me.”

OHA president Karen Phibbs congratulated all the people honoured Friday, including top prospects, players of the year at each respective level, top officiating prospects, and memorial award winners. She also credited their families for working to support them.

She said the people recognized on stage have represented their communities and organizations well.

“You’re a really good cross section of where we’re going in the future,” she said. “I have great faith in hockey players and what they bring to the table in terms of what they do with their lives because you certainly come back to us with life lessons learned and professionalism both in the game and in life itself.”

Casselman told the Beaver winning the award was “an honour,” particularly in light of the terrible accident that took Sanderson’s life.

“It was very special to have been chosen and to accept the award from his mother.”

He said having the presentation at the Hockey Hall of Fame was a fun experience, especially as he was able to share it with his mom, his grandparents, his girlfriend and Raiders executives.

“Having my family there to show so much support means everything to me. I think my grandparents have missed one game over my entire junior career and I  can’t say how much that means to me. My parents are always behind me in everything I do and pushing me to be my best at all times.”

He’s hoping that his best will contribute to one more special memory to cap his junior hockey career.

“Next season, all I want is to win the Schmalz Cup. Nothing else matters since it is my last season of junior hockey. To win a championship in my hometown is all that matters at this point.”