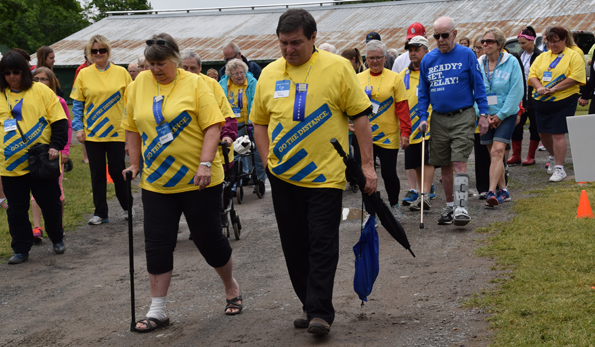 Kingston’s Invista Centre track will be the site of the Kingston, Frontenac, Lennox and Addington and the Waterway’s 19th annual Relay for Life on June 22.

As with last year, the surrounding communities have combined their events into one mega-event based in Kingston. Participants can take part as individuals or as a team, walking laps around the track from 6 p.m. to 12 a.m. all in the name of raising funds for the fight against cancer.

“It’s really about the participants and really about the survivors coming out and showing support for (anyone battling cancer) from the community that surrounds them,” said Kelly Merrithew, community fundraising specialist for the local branch of the Canadian Cancer Society. “It’s always very touching to be participating in a Relay For Life.”

Holding a singular event is a bit of a departure from the previous format, when communities such as Napanee would hold their own event. They’ve also shrunk the event to a six hour event rather than an overnight one in an effort to make it more family friendly.

“You do what works for your community,” said Merrithew. “We’re finding in Kingston numbers have just been dwindling over the last four years for various reasons. It made sense for us to do a six hour relay.”

As always, the night will start with cancer survivors wearing bright yellow shirts taking a lap around the track. They’ll then be joined by friends, family and supporters. Around 11 p.m. luminaries will be lit in honour of those who lost their battle against the deadly disease.

“Everyone participating in a relay has been touched by cancer, whether they’re care givers or have had cancer themselves,” said Merrithew. “It’s quite symbolic of the journey people are going through, but we always leave on a high note to symbolize the hope that one day there will be a cure.”

Unfortunately the odds are great that someone will be directly affected by it in their lifetime.

“We do it because cancer rates have been increasing,” said Merrithew. “Now one in two Canadians will be affected by the disease in their lifetime and one in four Canadians will unfortunately die from the disease. The money that is raised at relays across the country will really impact the services and the research that’s done so we can finally get to a cure. We’ve come a long way but there’s always a long way to go.”

Merrithew says the research has made a huge difference over the years as the survival rate has more than doubled since the 1940s.

The June 22 event will feature live music from Rudy and Saddle Up and Flashback as well as a DJ, massage therapy students from Trillium College, hair donation centre, kids zone and volunteer firefighters barbecue.

To register a team, visit www.relayforlife.ca/kingston.