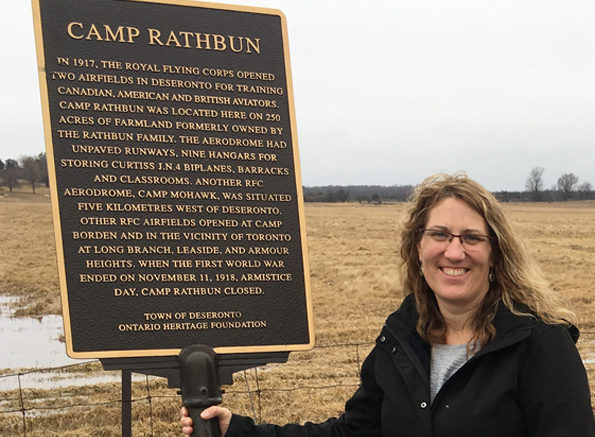 Next month, five researchers from Memorial University in St. John’s, Nfld. will be combing through fields alongside Deseronto Road in search of a better understanding of Canadian aviation.

Archeology professor Michael Deal has been doing some work in Newfoundland to record the sites of downed Second World War aircraft and he’d had some success completing a survey with ground-penetrating radar to local a historically important aircraft in at the Gander International Airport in 2016. News of his expertise had reached Maj. William March, the senior editor of the Royal Canadian Air Force Journal who was involved in documenting another important discovery that year.

Deseronto Road farmer Terry Kimmett was cropping a piece of land at Gold Wing Ranch that hadn’t been cropped since 1903. Going through the field, he discovered cutlery, plates, and cups he presumed were from the Royal Flying Corps training station, Camp Rathbun, which stood there from 1917 to 1919. March believed the artifacts likely came from the camp’s mess hall.

“He was interested in having someone come up and take a look at Camp Rathbun. It’s a relatively unique site being a First World War airfield,” Deal said.

He explained only seven airfields were set up as part of the training program. Camp Rathbun, and nearby Camp Mohawk, which is on the Tyendinaga territory were two. Camp Borden, near Barrie,  Armour Heights and Leaside, in Toronto, and Beamsville in Niagara were the others.

The Toronto sites gave way to development. Beamsville is now being used for a farming operation. At Borden, the hangars are still standing and it’s a significant historic site. The Mohawk field remains an airport today, while Rathbun is somewhat different because it has remained relatively the same.

“Rathbun is relatively untouched,” said Deal. “What we have left is the concrete footing from the hangars. The original hospital is still standing, it’s been converted to a private home. One of the original guard houses is still there and another building that was for storing ammunition. Those are the only standing buildings.”

From the air, however, Deal said one can still see discolouration on the ground in some areas that suggest where the original buildings were. His team hopes to dig a little deeper to define what may have been on the site.

“What we want to do is survey the entire area and relocate as many buildings as possible. The ones with the concrete footings are obvious. At the other end of the field, where the barracks and mess halls were, you can’t see anything on the ground. When you walk over it, you can’t see much of anything.”

While photographs show as many as 30 structures were once standing, there is no known existing map or plan for the airfield. That’s where ground-penetrating radar will come into play.  The technology uses pulsating radio waves to image the subsurface of the ground. Differences in the signal suggest buried objects or footprints.

After using the radar, the team will also use metal detectors to see whether plane parts or other artifacts are buried around the airfield. Deal says there likely won’t be any excavation on this research trip, but findings may mean future work.

It is hoped the research time will be able to produce an accurate map of existing features on the former airfield, complete with GPS co-ordinates. That information may help with promotion of Camp Rathbun as a nationally significant historic site.

The project will start June 11 and the team is committed for three weeks. Deal isn’t certain how long the work will take.

“It’s really something new for me,” he said. “I’ve done a lot of work with aviation sites, but I haven’t had a chance to work on an airfield before. It’s quite a big area to cover. We’ll take a few days to determine exactly what we can accomplish in three weeks.”

The team includes Deal, one of his colleagues, two graduate students and a technician.  A Mohawk observer will also be contracted, which is standard for work where Indigenous artifacts may be located.

The project will be funded with grants from a Memorial University fund dedicated to projects related to the First World War and from the Royal Canadian Air Force. Deal also said the support of the current property owners also makes it an “ideal time” to complete the surveying work as that isn’t the case with all properties of interest.

Nancy Bruinsma, a friend of the Kimmett family who bought the former Camp Rathbun hospital about a year ago, told the Beaver she’s supportive of the project because it allows the Memorial students a hands-on learning opportunity but it is also an opportunity to develop a better understanding of the lives of the individuals who were at Camp Rathbun.

After learning about her home’s history, Bruinsma said she developed a keen interest in uncovering more about the past history of the site.

“You start thinking about who once occupied the home or the stories associated with it about the pilots in recovery there. Several pilots died during the Spanish flu in 1918 and just knowing several people died in my home and several people were hospitalized there, I can help but think: If the walls could speak, what stories would they tell?”

She has found medicine bottles dating back to the Camp Rathbun period on her property.

When she heard about Deal’s team coming to study, Bruinsma has been trying to find ways to help. Through her own research, she connected with the family of the late J. Allan Smith, a Second World War pilot who extensively researched Camp Rathbun for over 10 years. His daughter has granted access to his photographs and research, including some that were never documented that might help to lend a clearer picture.

Bruinsma said she and the Kimmetts will make themselves available as resources for the duration of the survey. She has also taken steps to recruit more help as she believes the team might benefit from their support.

“It’s a lot of land to survey in a three-week period. They may want or need volunteers,” she said, adding there may be a need for people to hold measuring tape to record the dimensions of buildings. Those historians who have collected information about Camp Rathbun may also be of use.

“If you have pictures or documents that may be tucked away in boxes, it’s an opportunity to bring them out and see if some of that information is relevant in putting the puzzle pieces together.”

Those interested in volunteering can contact Bruinsma at bruinsmanancy@gmail.com. Bruinsma said there are also plans to hold an open house at the Gold Wing Ranch June 9 to share some artifacts and offer information about the project.