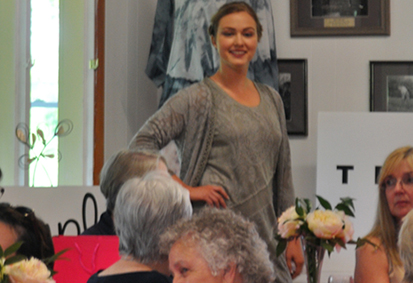 Every seat in the Napanee Golf and  Country Club was full Sunday afternoon as a mostly female audience turned out for an afternoon  full of friends and fashion for a good cause.

A spring fashion show designed to show off this season’s lines at downtown shops April’s Image and October’s Clothing raised $500 for the Lennox and Addington Poverty Reduction Committee.

Organizer Doris Lucas said she regularly does fashion shows, but she was particularly pleased with the way this show went.

“I was quite pleased with it, really. It was a good turnout, actually a bit better than I thought,” she said.

Lucas said she became aware of the Lennox and Addington Poverty Reduction Committee through her daughter-in-law Shelley Hagerman, a crisis worker with Mental Health and Addictions Services who is a member of the committee. She noted she liked that the organization is focusing its work on the local community.

“I like to do things for our town and in our town as far as giving to charity,” she said.

Hagerman spoke at the start of the fashion show and said the committee raises funds for a backpack campaign and a boot campaign for children. It also helps with food drives for the Salvation Army and Morningstar Mission.

“We’re all volunteers. With the need increasing, we’re looking at options for fundraising. This (show) is something we got on board with and we are very thankful for it,” Hagerman said.

Lucas said the golf club provided a terrific atmosphere for guests to enjoy lunch and see the latest from designers like Sympli, which offered a trunk show of its latest fashions as part of the event. She said she believes the club is an underrated event venue that has much to offer, including great catering.

Lucas said her models did an excellent job and she was happy to count Miss Greater Napanee, Meighen Hodgen in that group and offer her exposure as she prepared to compete for the Miss Canada World crown this summer.

Lucas said she can also measure the event’s success by the response from customers visiting her stores.

“We had a lot of good feedback and sales are always good for a fashion show, but I think sales over the last two days has beat anything we’ve ever had,” she said.

Lucas said that’s encouraging given the Dundas Street reconstruction. Despite the main street being torn up, she said numbers are up over last year. Creative ideas like the fashion shows help that along.

“The whole thing is to think positive,” she said. “You have to make up your mind to do things that are different. With new ideas, you can keep customers coming to town and to your business.”