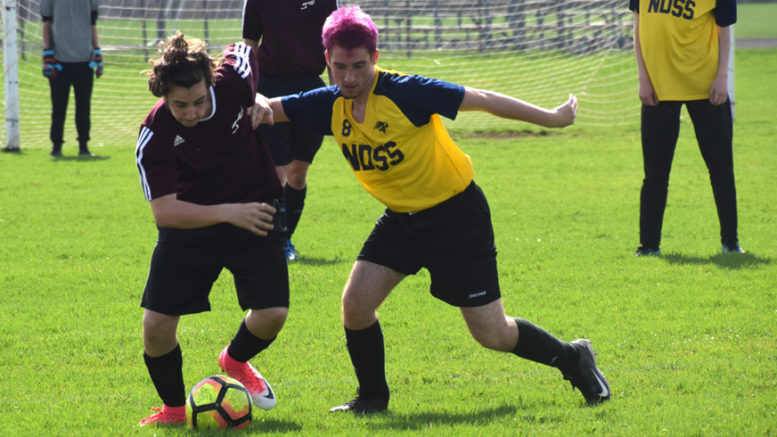 Tie Deremo (right) of the NDSS Golden Hawks attempts to steal the ball from a Frontenac Falcon during Friday’s game. Photo by Adam Prudhomme.

The NDSS Golden Hawks junior boys soccer team turned in their strongest performance of their season at home Friday against the Frontenac Falcons.

Unfortunately for them however it still wasn’t enough to secure their first KASSAA league victory as they fell 4-2.

Both teams had to contest with high winds throughout the game which had a tendency to send the ball on an unpredictable paths both in the air and on the ground. The Falcons came out strong by scoring the opening goal just four minutes into the game. They added a second midway through the half on a direct kick.

John ten Cate got the Hawks on the scoreboard late in the half with a shot from the side of the net that just eluded the Falcons keeper and hit the opposite post and deflected into the net.

In the second Jace Fredenburgh added another for the Hawks, but it wasn’t enough. With the winds at their back the Falcons were able to score two in the second half and held on for the victory. Despite the high winds, Hawks keeper Griffin Newton made some big saves and helped set up a few scoring chances with booming drop kicks that made it all the way into the Falcons’ half of the pitch.

The young developing NDSS team wasn’t able to build on their success in their next game against the tough KCVI Blues however, as they were blanked 10-0 at Miklas-McCarney field in Kingston.

The loss drops Napanee’s record to 0-6 on the season. They were scheduled to host the Holy Cross Crusaders tomorrow afternoon. Results weren’t known at press time. They will close out the regular season on May 14 when they welcome their cross-county rival Ernestown Eagles to their home pitch.

NDSS’ girls soccer team is also still searching for their first win of the season following a 6-1 home defeat to the KCVI Blues on Monday. Leah Carscallen scored for the home team.

On Friday they played the Falcons tough on the road, falling 3-0. They’re now 0-5-1 on the season.

They were scheduled to travel to Holy Cross yesterday afternoon. Results weren’t known at presstime. They will close out the regular season on the road in Ernestown on Monday.

On the rugby pitch the NDSS Golden Hawks girls bounced back from their first loss of the season on Friday with a 57-5 win over Holy Cross.