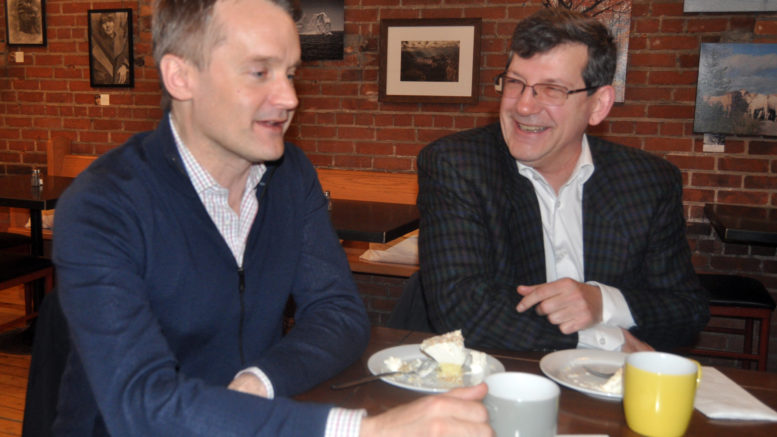 Canadians’ understanding of the toll of military service on veterans and their families has improved greatly since the end of the First World War, but until recently, little changed in what the country did for them.

Now, Veterans Affairs Canada (VAC) is trying to play catch up to ensure its programs and services meet those realities and its causing some unease. Seamus O’Regan, Canada’s veterans affairs minister, was in Kingston and Belleville this week for town halls allowing him to speak directly with veterans about his work since taking on the portfolio.

He and Hastings-Lennox and Addington MP Mike Bossio met with the Beaver Thursday to discuss his visit.

O’Regan explained until 2006, the federal government followed the Pension Act of 1919 in providing compensation for veterans who incurred service-related pain and suffering.  Benefits were prescribed based on a limited assessment of physical injury and qualifying veterans received a lump sum payment.

“The Pension Act was developed 100 years ago. We didn’t have a grasp then about what veterans go through in terms of PTSD (post-traumatic stress disorder) and mental health. It was very simple. You fell into one of a few categories and you got a cheque. We now know we owe a lot more to veterans,” O’Regan said. “Complex problems, if they’re treated effectively, require complex solutions.”

The system didn’t work for many veterans, including young men and women returning from conflict in Afghanistan.

“They’d be given one lump sum and be feeling like they were written off the ledger,” O’Regan said.

In 2006, the federal government agreed with the Royal Canadian Legion and other veterans groups that a different approach was needed and a more flexible regiment, known as the New Veterans Charter, was introduced. O’Regan noted the Liberal party felt the previous government didn’t do enough with that framework to follow through on Canada’s commitment to support its vets.

“We had to make some adjustments,” he said.

Since the 2015 election, the federal government has committed $10 billion for new programs and services for veterans — many of which he says came directly from consultation with those veterans and their families. A difficulty has been communicating change.

“We all know from our personal experiences, change and transition brings anxiety,” he said. “The irony is by putting out these new programs to lessen anxiety, we’re creating more anxiety because people don’t know what’s coming down the pipe.”

A main tenet in that investment is a new pain-and-suffering compensation regime called Pension For Life, which was introduced in December, and will take effect in April 2019. It provides a monthly $1,150 non-taxable stipend for pain and suffering caused by service-related disability that could be augmented to as much as $2,650 in more severe cases. There’s also a taxable income replacement benefit available. O’Regan added the funding is retroactive to 2006, so if a veteran had a claim resolved over the last 12 years, it will be reopened and if Pension For Life offers more compensation, that will be forthcoming.

The minister also stressed the legislation was crafted with PTSD in mind as it encourages veterans to work.

“I’m a firm believer that meaningful work can make such a difference to your mental well being. We want to be able to incent people to work. For the first $20,000 (earned at work), there’s no drawback.”

O’Regan said the government realizes that PTSD effects can take hold any time and with VAC offering a more relational, long-term approach to veteran’s well being, access to therapy could be more seamless. To that end, his visit to the region was also important as he officially opened a satellite clinic for occupational stress injury in Kingston Thursday.

“We’re able to do a lot virtually helping people with mental illness or injury, but at the end of the day, you can’t beat face-to-face. A lot of people are going to Ottawa from the Kingston area. Now we’re getting closer to them. It’s not just a matter of convenience, but a matter of engagement. We know if there’s any obstacle in the way when it comes to dealing with mental illness, they’ll take it. If you can get closer to the people, they’ll get the help they need.”

Just this week, the government also rolled out a series of other benefits for veterans and their families. There’s a tax-free monthly benefit for caregivers helping veterans with daily living, career counselling services to help veterans transition to civilian life, a commitment to supporting Military Family Resource Centres for six years, an emergency fund, and an education and training benefit for all veterans that provides $40,000 after six years of service and $80,000 after 12. The education and training fund is based off the American G.I. Bill.

Bossio said in the town hall meetings and in regular discussions with veterans in a riding where many settle after service at CFB Trenton or CFB Kingston, the direction is being well received, people are just eager to see implementation.

“I think a big part of it is $10 billion in the last two years is a huge amount of money for a lot of programs and services. That’s a lot of change,” Bossio said, noting that it’s been difficult for VAC staff to keep pace with the investments and programs. He understands that veterans are both frustrated they’ve endured a long wait and excited to move forward.

In last year’s budget VAC received $42 million to help it meet that demand.

For future generations, that engagement shouldn’t be as much of a problem. The new programs are coming out with a digital component and O’Regan said VAC is working closely with the Department of National Defence to improve convergence and to ensure members of the Canadian Armed Forces have a clear link to veterans’ services before leaving the military.  With his deputy minister Walt Natynczk a former Chief of Defence Staff and senior military personnel closely integrated with the ministry, those links are being forged.

Through their town halls, O’Regan and Natynczk are also eager to win over current veterans, staying to listen and to answer questions long after formal presentations end. Given the nature of PTSD, he said he’s also quite willing to hear veterans outside of the spotlight. After all, he said even as he stands by the choices made to invest heavily and design programs, he’ll continue working to serve veterans.