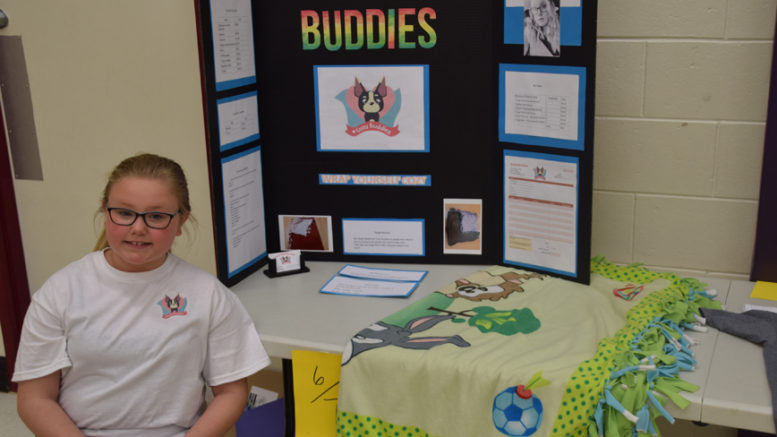 The next generation of business tycoons were displaying the next big ideas in Selby Public School’s gym last week, as Grade 6,7 and 8 students showcased their entries into Lennox and Addington County’s Kidpreneur project.

“The kids were to take their passion, their ideas, and turn them into a small business plan,” explains Emily Wemp, a teacher at Selby Public School.

With some guidance from the County’s economic development department, the students were given pointers on the steps that go into starting a business. They were then tasked with coming up with their own business plan for a hypothetical business, with the added caveat that they had to research all the costs that would be involved with starting that business. They then had to prove why they feel it could be a profitable endeavour were they to launch it in the real world.

That gave the students a chance to utilize their math skills in a real life application.

“What they thought was a great idea, when it came down to expenses, they realized they weren’t profiting,” said Wemp.

Among the students showing their ideas was 11-year-old Sarah Perrin, who created Cozy Buddies, which sells unique one-of-a-kind blankets which she creates by hand.

“I started to make them for family and friends at Christmas,” said Perrin. “I found out I really liked to make them and a lot of people were buying it. Then this Kidpreneur project came up and I thought ‘why not do this, because I already know how.’”

While she already had the crafting expertise, she says she was surprised to learn about the expenses that would go into launching a start up.

“It’s very expensive to start your own business,” she added.

That knowledge in hand, it still didn’t deter her from exploring the idea of taking her business beyond a school project.

“I think I’m going to continue on with it after I’m done with the kidpreneur project,” she added.

That’s the kind of reaction L&A County’s director of community and development services Stephen Paul was hoping for when they approached schools with this project.

Along with Selby, similar fairs were held at Southview Public School and J.J O’Neill, with a select number of students being picked to present their businesses to a panel of judges at the L&A County Museum and Archives on April 25.

“We wanted it to be more than just an idea,” Paul said of the project. “What’s really interesting is children at this age have lots of ideas bouncing around in their head. That’s why we thought it was important to start the Kidpreneur project at the 6,7,8 (grade) level.”

Paul says it was important that they had the students research the idea to see whether or not it could be feasible. The hope is that by doing actual research, it will get the students really thinking about perhaps starting their own business down the road after they finish school.

For many of the projects presented by the students, Paul says it wouldn’t take much tweaking for them to launch them as an actual business.

“That’s a big part of the growth of L&A County, is by entrepreneurs and small business owners,” said Paul. “I’m a big believer that we need to start early with our youth to show them you can take that idea and be successful.”

“In rural communities, youth retention is always a bit of a struggle and a challenge,” added Paul. “We want children to start thinking now that they can stay in this community and develop their own ideas and businesses.”