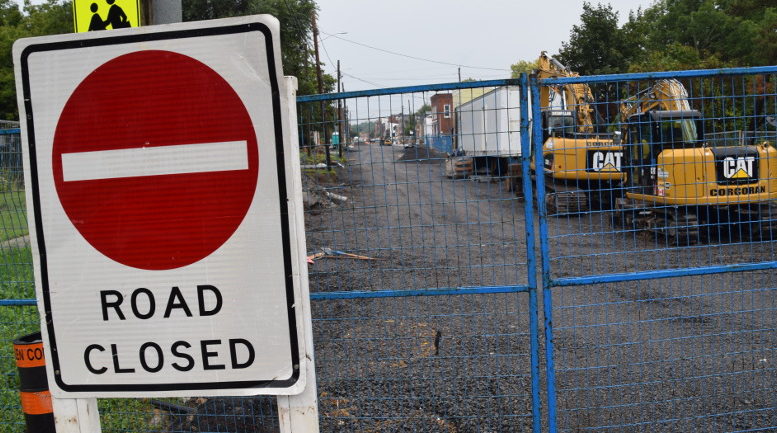 The next phase of Digging Downtown will resume later this month. File photo.

Crews are mobilized for Napanee’s second consecutive summer of main street reconstruction as it is anticipated Gordon Barr Construction Ltd. will begin road closures for the second phase of Diggin’ Downtown by April 16.

Lennox and Addington County roads and bridges manager Chris Wagar said crews are already working on temporary waterworks around the Dundas Street site. He businesses have already been notified of the construction work and notices will go out from the contractor to neighbouring residents and those along the Bridge Street detour route in advance.

Last Wednesday, there was a public information session held at Greater Napanee Town Hall to discuss the specifics of this phase, which will run from Centre Street to Adelphi Street, between now and the end of October. Wagar said most people at the event were supportive of seeing the multi-million-dollar infrastructure renewal project resume.

“They know they have to do it. They only real concern was timelines,” he said. “People would like to know when so they can co-ordinate business efforts around that. There wasn’t anything negative I gathered from the meeting.”

The work will be done in three sessions delineated by street blocks. First will be from Centre Street to John Street. Next is John Street to East Street, followed by East Street to Adelphi Street.

“They’ll go block-by-block,” Wagar said. “They’re not going to close the John Street intersection until they need to excavate. They’ll do all the work on the first block, then go to the second block after that. It’s very similar to last year’s phased approach. As they leave blocks, they’ll open them up.”

For each block, there will be five stages of work.

First, preparation will include the set up of fencing and detour signage. Service excavations will be dug from each building out 2.5 metres for new water services to be installed. Pedestrian access will be reinstated. Temporary water mains and temporary sanitation diversion will be in place.

Next, municipal infrastructure will be replaced. A hydraulic breaker will be used as no blasting is allowed in the contract. Work hours are from 7 a.m. to 6 p.m. Monday to Thursday and 7 a.m. to 4 p.m. Friday. Longer hours or Saturday work would be considered if necessary to stay on schedule. Fencing will remain.

Third, water lines will be reconnected and tested.

Fourth, electrical infrastructure, including light poles will be installed. Concrete work — which is weather dependent — will commence once the utility and electrical installations are complete. Curb work and sidewalks will follow.

Lastly, asphalt will be poured and graded.

Wagar stressed there will be pedestrian signage to help direct people to businesses, which will remain open during the work. Barr will retain Joe Hogan as a community liaison officer to work with businesses and residents throughout the process. It will also have staff at the corners of blocks under construction to help residents with navigation.

According to Wagar, many communities have undertaken similar projects in recent years due to the age of previous infrastructure. One such community, Smiths Falls, is slated to begin next year and Wagar said they want to emulate the work being done in Napanee as officials were happy the Town and County didn’t go for stamped concrete and other expensive features but selected an efficient style of construction that looks attractive.

“We spent money where we needed to and minimized where we didn’t need to,” he said.

Wagar indicated the construction selected should allow for a lifespan of between 60-75 years for underground services and between 50-60 years for roadway features like curb and sidewalks.