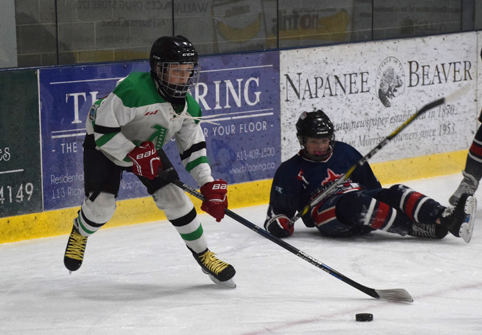 Ethan Sutcliffe of the Napanee Peewee BB Stars gains control of the puck behind his own net during Sunday’s Game 2 of the OMHA finals against the St. Mary’s Rock. Photo by Adam Prudhomme.

The Napanee Peewee BB Stars had an impressive start in their OMHA finals with two wins over the visiting St Mary’s Rock to lead the six-point series 4-0.

They won the opening game 4-2. Gavin Brooks sent Spencer Cranley in on a fine individual effort to deke the goalie to draw first blood. The Rock had a 10-9 advantage in shots after one period, but the Stars were energized in the second, when, on a power-play, Carter McKee took a feed in the slot from Cranley. He misfired, but his second attempt hit pay dirt. Seconds later, Cal Uens walked in alone, put the deke on the netminder to get the game winner. 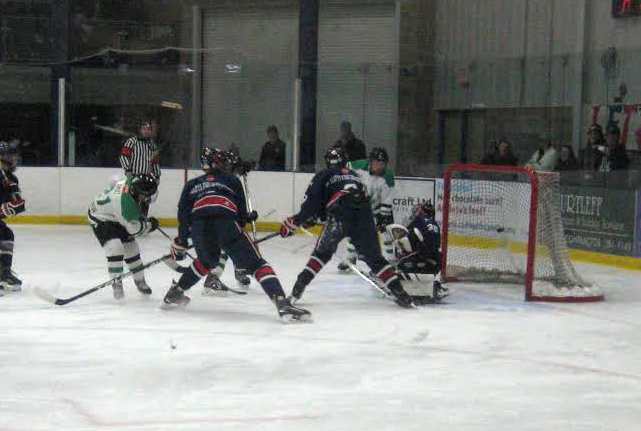 Luc Amat of the Napanee Peewee Stars scores to make it 4-2. Photo by Murray Kelsey.

Not finished yet, the Rock fired a long shot from inside the blue line, also on a power play, which eluded the netminder, and put them on the board. Napanee had the shot advantage in the second, 11-3. Jimmy Schiedel of St Mary’s made it 3-2 on a rebound in the first minute of the third, again on the power-play, but Luc Amat closed out the scoring on a fine high shot from the slot. Goalie Sam Rickard was sharp facing 20 shots, while the Stars sent 31 pucks toward the Rock’s netminder, Josh Ballantyne.

The two teams were at it again Sunday for Game 2, also held at the SPC.

Napanee’s offense broke out in a big way in this one as the boys earned a decisive 7-2 win displaying their offensive prowess.

Uens showed his playmaking ability a couple minutes into the contest by firing a shot, picking up the rebound behind the net, and feeding Cranley who scored over the glove hand. A couple of minutes later, Uens found the five-hole, and Cranley went end-to-end to bury his second tally.

That was the end of goalie Carter Froggett’s day in the Rock crease, and the change spurred the guests on to get their first goal. Cranley finished his hat trick before the first frame ended to make it 4-1.

Rourke McEwen made it 4-2 early in the second, but Uens went top shelf on the power play, and he also set up McKee to run the score to 6-2.

In the third, Uens took advantage of opportunity when the Rock goalie fell, by sliding the puck in the side for his hat trick.

Ethan Sutcliffe and Owen Maracle got assists on the play. The locals outshot St Mary’s 23-19.