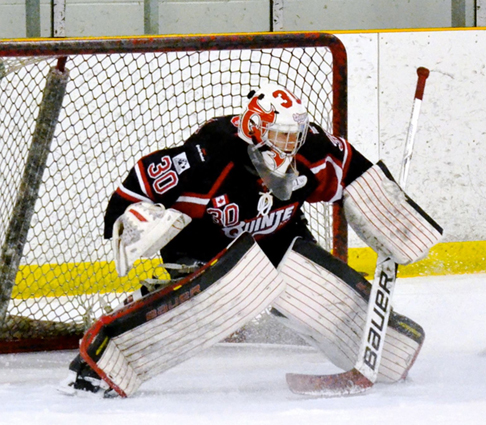 In the midsts of helping the Red Devils top York Simcoe, the 13-year-old goalie also earned an invite to a Hockey Canada development camp, which will take place April 28-29.

Votary is one of 65 goalies across Canada aged 13 who earned the invite.

“It’s a program that’s been developed to get the kids where they need to be to represent the country,” explains Larry Votary, Corbin’s dad. “You’ve got to go, show your best, then next year they have the same camp and invite kids back, but not the 65, it’ll probably be 30.”

“I was really excited to get the opportunity,” added the young goalie.

Earning an invite to the camp is the first step towards earning a spot on a Under-16 national team, en route to Under-18 and taking part at the World Juniors.

Votary’s selection at the age of 13 is part of a new approach in which Hockey Canada hopes working with goalies a year earlier than they’ve have in the past will aid in their development.

“This new program of starting the goalies earlier is a collaborative of the Ontario Hockey Federation and Hockey Canada,” said the elder Votary. “It’s really a pilot program after I believe two years ago there was an assessment in Calgary where they brought a group of goalie experts together to monitor the health of (Canada’s) development program and goalies in Canada.”

“To start the training at 13 is brand new,” said Votary. “We’re pretty excited to be a part of the program.”

The younger Votary says he stepped up his commitment level to hockey heading into this season and its paid off in a big way. He wrapped up his best regular season to date, allowing just 26 goals in 23 games with a 1.55 goals against average and seven shutouts. That helped propel the Red Devils to a 31-4-1 record and now a berth in the OMHA finals, which will take place this weekend in Ajax.

Votary moved from forward to goalie at age 8 and never looked back. Since then he’s been working towards the goal of one day turning pro.

“I like the focus, competitiveness against the other players,” he says of playing in net. “Make a big save and it gets the crowd going. It’s pretty fun.”