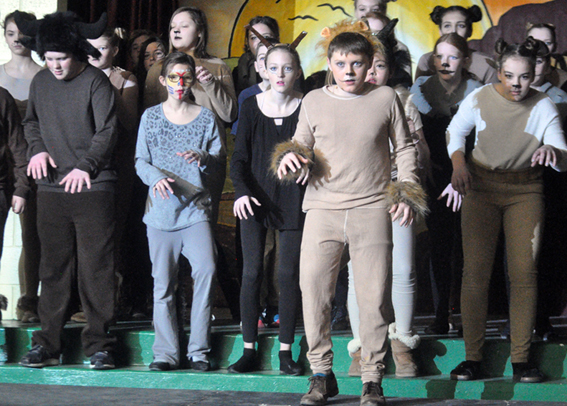 Simba (Spencer Cranley) tries to stay ahead of a stampede as all members of the animal kingdom are on the move as part of J.J. O’Neill Catholic School’s production of The Lion King. The musical wraps a three-day run today with performances at 10 a.m. and 6:30 p.m. Photo by Adam Bramburger.

At first glance, it may seem like there’s more to see than can ever be seen on the J.J. O’Neill Catholic School stage this week.

Close to 40 students dressed in elaborate costumes portray all the animals of the jungle. There’s dramatic lighting, intricate sets, well-choreographed numbers, and  witty humour to spare.

Back in September, however, for the cast and crew of The Lion King it may have seemed like there was more to do than could ever be done. Bit by bit, through hard work and self realization, they grew into their roles, just as Simba did on stage.

It’s just part of their own circle of life at a school that’s become known for offering students from Grade 4 to Grade 8 an outlet to perform in a polished dramatic production every year.

“In September, we were just singing in our seats. It wasn’t pretty and it wasn’t that good,” said Marie Hetke, one of two actors playing Simba, the young son of king Mufasa who is forced to grow into the thrown. “Now, we’re a lot better.”

A veteran of several plays at school in the community, Hetke said she loves being on stage.

“Going on stage, you feel like everybody is watching you and it’s your chance to be good. It’s just fun running around stage and singing,” she said, adding it’s “awesome, but terrifying” to appear in front of so many people she knows.

The other Simba, Spencer Cranley, had a chance to experience that for the first time.

“This is my first ever time being in a play. It’s really fun… It’s just come together right now,” he said. “The spotlight is on you and even  if you mess up a line, nobody knows but you and a couple other people.”

Cranley said probably the hardest part of adapting to life on the boards was memorizing his lines — but he’s managed.

At Monday’s dress rehearsal, he really enjoyed hearing applause and laughter from the audience and knowing how the play was received. Cranley confirmed felt really good for the cast to feel the love that night.

Samantha Falcao, another cast member, said she always looks forward to that feeling of being on stage. She played the monkey Rafiki.

“Ever since I was really young, I just always loved to sing and act, so whenever there’s a play, I always try out for it and put my best effort into it,” she said. “I was lucky this year to get such a big role.”

In order to encourage participation and development, the majority of those big roles were double cast.

The cast met twice a week before Christmas, then moved to daily rehearsals after Christmas. They met at lunch, after school, and even once on a Saturday.

“I think I’ve grown closer with a lot of people in the cast,” Hetke said.

Nathan Crosby played the villain Scar and he said he was really looking forward to the play, once he found out it was The Lion King.

“It’s one of my favourite Disney movies,” he said. “I requested Scar because he was my favourite.”

A clan of hyenas creates a makeshift throne for Scar (Nathan Crosby) during J.J. O’Neill’s dramatic production of The Lion King this week. Photo by Adam Bramburger.

Crosby said he really enjoyed the opportunity to wander around the stage acting like he’s better than others and pretending to yell at people. He was really excited to have the chance to lead his own show-stopping number, “Be Prepared,” in which he deviously lays out his plot to become the new king.

His cast mates also seemed to really like the story, which Disney adapted from Shakespeare’s Hamlet.

“I like the message that even if you want to run away and freak out about all your problems, you still have responsibilities and you have to go back and fulfill them,” Hetke said.

Cranley added he really liked theme portrayed through the song “Hakuna Matata” where Timon and Pumbaa, two supposed lesser creatures of the jungle, a meerkat and a warthog, teach the young lion to lose his inhibitions and continue on his path to the throne.

“It means no worries,” he said. “You can have fun and be yourself.”

Overall, the young cast, directors Jillian Perreault, Danielle Kennedy, and Steve Kennedy, and other supportive teachers and volunteers  have put together a funny, engaging spectacle that goes far beyond what one might expect from an elementary school play. The prepackaged accompanying music also adds to the experience.

Today marks the last chance for the public to see the show after a three-day run of twice-daily performances. Show times are at 10:30 a.m. and 6:30 p.m.