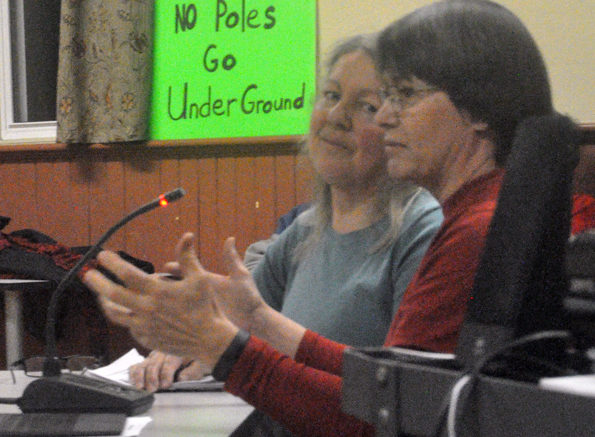 Stone Mills councillors narrowly decided Monday to require the proponents of the Loyalist Solar Project to bury all of its transmission lines even though they were told that might jeopardize the project.

Before an audience of about 40 people in Centreville — some waving placards to show their support for burying cables — council heard conflicting presentations from Karen Whiteman, a neighbouring landowner, and Andrea Garcia, the development lead for proponent BluEarth Renewables Inc.

Whiteman told councillors 556 people signed a petition requesting the transmission lines for the 54-megawatt project be buried along the route from the substation to the solar panels along Sheffield Bridge Road to Centreville Rd. via Murphy and Edges roads and County Rd. 27.

She stated residents were concerned about Internet transmission in the Croydon area from a tower at the corner of County Rds. 4 and 14, a potential for negative impact on large birds and other wildlife, a loss of trees along the route, and depreciating property value. Visual impact was most important, she said.

“The trees are a big-ticket item for us,” Whiteman said. “Approximately 600 trees on Murphy Road alone will be cut down. Zero trees will need to be cut down if we go with underground cable.”

She also suggested that with the exception of County Rd. 27, much of the trenching for underground cables would be done within the road, limiting further risk to trees and wildlife. According to Whiteman, BluEarth visited with residents in a particularly wet winter, so they should know what is required to go underground through wetlands successfully. An additional savings, she said, could come from the durability of the underground wires not subject to winds, ice, downed trees, or other impacts.

She acknowledged cost is a factor, suggesting underground wiring does cost twice as much as overhead but said with a shorter line than other projects that have buried their lines like the Grand Bend Wind Farm in southwestern Ontario and Prince Edward County’s proposed White Pines Wind Project, it is cheaper.

Whiteman suggested opponents don’t want to kill the project, they simply want to make it better for future generations by burying the wires. She urged councillors to support that direction.

“We call this a legacy decision. Once you put a pole up, there will never be a mature tree in that space again. Burying the lines is good for everyone, now and in the future. We want you to see that it is affordable. Please, let’s keep Stone Mills beautiful. Please bury the cables.”

Councillor Doug Davison said he didn’t believe burying cables would result in no trees dying, suggesting if roots are cut in the trenching process, that will weaken the tree and it might die in future years.

Reeve Eric Smith also reminded council that for every tree BluEarth cuts, it intends to relocate or replant two in vicinity of the project. He said those trees damaged in trenching could cost $1,500 per tree to remove.

Garcia told council BluEarth was still recommending a mix of above-ground and underground wiring but that it had made changes to its original transmission line to ensure residents don’t see the line from their homes.  Those changes have added considerable cost to the project already.

“What I can tell you is the accommodations already described here today have resulted in a $10-million increase to the price of the line as originally estimated, which has effectively used up all the contingency for the project, plus a little bit more,” she said.

Garcia acknowledge BluEarth couldn’t mitigate all of the residents’ concerns, though she attempted to address each. She promised the company would work with Internet provider KOS to determine impacts on line of sight from its tower and would work with the township to address problems created by the lines at its own cost. She also spoke about bird diverters that might help to address mortality.

With respect to the trees, BluEarth consulted with arborists from Natural Resource Solutions Inc. about impacts, particularly to the Murphy Road tree canopy. Garcia acknowledge above-ground transmission would see 840 trees requiring removal, with 35 trees likely sustaining damage to the point of mortality in the next three years. By going fully underground, only 481 trees would require removal, but 434 trees would likely sustain damage to the point of mortality in three years.

“What we took away from this is there’s going to be tree impacts, regardless of the method,” she said.

Some in the audience groaned and suggested with trenches in road surface, those numbers appeared high.

Addressing cost concerns, Garcia argued comparing Loyalist to other projects wasn’t an apples-to-apples comparison because other areas have softer rock that’s easier to cut through and those projects also required smaller single-circuit cable, as opposed to triple circuit.  She also said those projects were approved during the previous feed-in tariff procurement regime, rather than the current one, which gave greater cost flexibility.

Asked about a timeline for decision, Garcia told council BluEarth is looking to start construction at the end of this month, so it was hoping for a decision Monday.

Davison asked if burying lines would kill the project.

“We have fairly clear guidelines on the minimum return our board will accept. We are close to that with the $10 million we’ve increased in terms of the connection line. If we were to experience any kind of substantial cost increase we’d go down near that number,” he said. “I can’t speak for our board. I don’t know what they would do. I can state for clarity, we would be below our low rate of return and it would put the project in jeopardy.”

Councillor Martha Embury said she was ready to make a decision.

“This has been a long process for all of us. We got elected to make these tough decisions and It’s time for us to make a decision. I’m not keen on gathering more information and coming back,” she said.

Embury stated Garcia had been an “awesome” project manager who was communicative, accommodating, and patient, but indicated she’d make a motion to bury 100 per cent of the cable.

She added a caveat the decision not be precedent setting for future council decisions on solar projects.

“The people have spoken and I plan on listening to the people,” she said.

Given his concern for cabling through sensitive wetland areas, deputy-reeve John Wise seconded the motion but introduced a friendly amendment that would allow cabling to go overground based on the recommendation of provincial approval agencies like the Ministry of Environment and Climate Change and Ministry of Natural Resources and Forestry, or other decision-making authorities, like CN Rail. He also noted that the motion should ask Lennox and Addington County to support its decision with respect to County Rd. 27.

Councillors Wenda LaLande and Kevin Richmond indicated they’d support the motion, but wished to see it as a precedent-setting stance for future development.

“If we’ve got 550 people on a petition, it’s highly likely in the event of another solar project, we’re going to be running into the same thing. People are going to want the wire buried,” LaLande said. “Why would we not want the wire buried in the future?  It would give vendors the idea right from boots on the ground of what they’re spending.”

Deb Thompson, Davison, and Smith each voiced concerns.  Thompson said she wasn’t moved by the petition.

“Petitions don’t mean a whole lot to me. In Camden East, I addressed five people off the back page of the petition. They didn’t have a clue about what it was about. The weight of a petition, to me, is just wasted paper. It means nothing.”

While Davison said he felt there was room for more above-ground wires, he was concerned with the financial aspect.

“A project this size pays an industrial assessment, something like 300 times the regular assessment. It pays a lot more. If this project goes through, this township will have some more tax dollars that hopefully will go to decrease tax bills. I hope we’re not doing something here that would jeopardize that.”

Smith agreed and noted the developer had been very accommodating. In addition to taxation, he spoke about the impact of a community vibrancy agreement  that is slated to give the township $2,700 per megawatt per year over the project’s 20-year lifespan to use as it sees fit — as much as $145,800 a year or $2,916,000 in total.

“I think BluEarth has bent over backwards for this project,” he said. ‘I’m looking at the fact 7,000 people here are going to lose out on $2.9 million over eight or nine landowners that cannot see a pole and it’s on municipal property. I have a real concern with that. We’re here to manage the municipality.

“I’m looking at the fact that down the road, that’s going to help. Don’t come here whining about taxes. Don’t complain about services. I wouldn’t be surprised if Loyalist says good-bye and if somebody else wants to put a solar project in our municipality, can you deal with them?”

In a recorded vote, council decided 4-3 to require all cables be buried on Sheffield Bridge, Murphy, and Edges road and to request the County require the same on County Rd. 27, all pending approval from higher authorities. Embury, Wise, LaLande, and Richmond supported. Smith, Thompson, and Davison opposed.