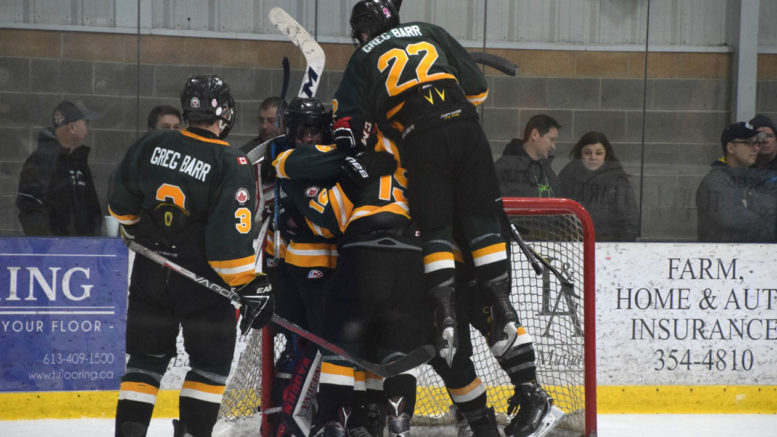 Amherstview Jets player mob their goalie Alexel Masanko after winning Game 7 by a score of 4-3. Photo by Adam Prudhomme.

Few people outside of the Amherstview dressing room would have given the Jets much of a chance in a seven game series against the record setting Napanee Raiders.

Yet on Tuesday night it was the Jets who were celebrating, hanging on for a 4-3 Game 7 victory to clinch the series and book their spot in the PJHL Tod Division finals.

“We always said if we were healthy, we had the players to do it,” said Jets head coach Denis Duchesne.

Amherstview’s Aidan Harris got the scoring started in the final seconds of the first period, scoring a back-breaking short-handed five-on-three goal.

Dejected but not out, the Raiders answered back in the opening two minutes of the second when Justynn Steven ignited the home crowd with a goal to knot the game at 1-1.

That’s when the Jets buckled down and found an extra gear, as Blake Hogle and Joey Mayer each potted a goal just over six minutes apart, putting the Raiders under extreme pressure.

Sebastian Kilcommons notched a power-play goal six minutes into the third for Napanee to shave the deficit to just a goal, but that was as close as they’d get. Hunter Chapman potted a huge insurance tally for the Jets at the 10:35 mark, which would up the game winner. Tyler Ignazzitto set up a nervous finish with a power-play goal at at the 14:22 mark to give the Raiders a ray of hope. Try as they might however, they couldn’t solve Jets goalie and series most valuable player Alexei Masanko, who stood tall down the stretch. He finished the game with 55 saves, out duelling Nicholas Nabuurs who took the loss with 24 saves. 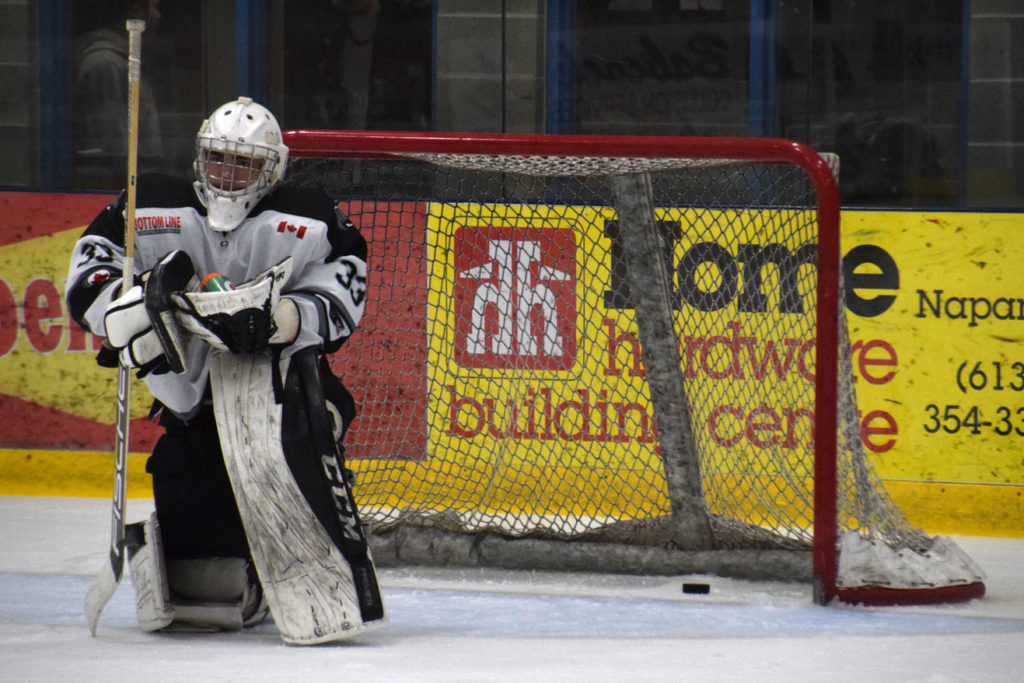 Napanee had come into the winner-take-all game riding the momentum of a thrilling Game 6 overtime win in Amherstview on Sunday down. Once down 3-1 in the series, the Raiders had rallied to force Game 7 on their home ice.

“After Game 6, there was a bad bounce in overtime,” recalled Duchesne. “Our guys went in and said ‘How sweet would it be to win it in front of 1,200 fans in Napanee?’ It was a really great atmosphere, coming in the guys were pumped up.”

Looking at the standings, the series win will go down as a Miracle on Ice of sorts for the Jets, who finished 38 points back of the 37-2-1 Raiders in the regular season, losing all eight previous meetings.

Though they stalled to an 18-20-1 regular season mark themselves, the Jets did some retooling just ahead of the playoffs and believed them could pull off the upset.

“At the deadline we went and got a goalie (Masanko, an affiliate with the Kingston Voyageurs),” said Duchesne, who also serves as the team’s GM. “He got hot and we rolled with Alexei. All season we were banged up pretty bad and with Junior C hockey it’s hard. It’s commitment and we got a lot of guys at Queen’s so that’s tough. But we had a full line-up going into the playoffs and the guys were committed and it paid off in seven games.”

After dropping Game 1 by a score of 3-1, Duchesne says it was back to the drawing board and they did some tweaking that ultimately swung the series in their favour.

“I was suspended unfortunately for the last game of the regular season and Game 1,” recalled the Jets coach. “I watched both games from the stands and took a lot of notes, took some video so I was able to dissect some systems. We were able to study them so that helped for sure. Credit to (Raider coaches Mike) Hartwick and Fozzie (Jeff Foster), they’re great coaches. On paper maybe the better team, but our guys had lots of heart and they didn’t give up.”

While the Jets now prepare to take on the second-seed Port Hope Panthers in the league finals, the Raiders are left to wonder how their once unstoppable team, which had visions of playing for a Schmalz Cup, failed to win a league they had dominated all winter.

The loss is eerily similar to the sour note of the 2008-09 season nearly a decade ago, when they set their previous high in regular season points only to be upset by the Jets in the playoffs. In that case however the Jets were the second ranked team, a thorn in their side all season and the two teams were squaring off in the league finals. As for the Jets, this marks their first trip to the finals since 2014.

Napanee will now embark on a long, and early, off-season as they ponder how it all went so wrong, so quickly. While other players will surely explore their options for next season before committing to returning or not, the team will say good-bye to overagers Zach Knapp-Hermer, Will Peirson, Riley Steeves and Josh Murphy.