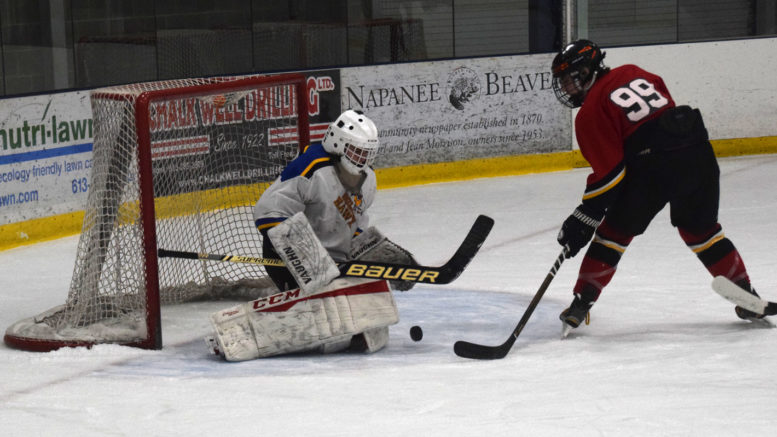 A once promising season came to a rather abrupt finish for the NDSS Golden Hawks boys hockey team, who lost 5-2 to the Sydenham Golden Eagles in Thursday’s KASSAA quarter-finals, held at the SPC.

Despite having the higher seed and home ice advantage, it was NDSS who spent nearly the entire game playing catch-up. Sydenham scored within the opening three minutes to set the tone. That lead held until the final minutes of the period when NDSS’ Ryan Kirkpatrick wristed a goal into the top shelf to tie the game.

Sydenham began to pull away in the second however as they were able to convert on a mad scramble in front of the Hawks net, gaining control of a huge rebound and flicking the puck just between the post and Hawks goalie Seth Lee’s blocker to go up 2-1.

NDSS had a chance to respond shortly after as they were granted a power-play, but couldn’t make anything happen. Sydenham made them pay when they scored again to go up 3-1 in what would be the eventual game winner.

Corbin Gibson had a quick goal for the Hawks to cut the lead to 3-2, but that was as close as they’d get. Ben White and Seth Barton picked up assists.

A break away goal in the third put the Eagles up 4-2 and they sealed the win with an empty-netter in the final seconds.

The loss was a tough finish for the Hawks, who at one point were in the running to finish with the top seed overall before stumbling in their final three regular season games.

“We could have ended up in first place, but we didn’t,” said Hawks head coach Jeff Birchard. “I still think they had a pretty good season.”

Napanee entered the year with a bit of uncertainty around their roster, but gelled together nicely over their first five games.

“We could have used a couple more bodies,” Birchard said of his final roster. “We thought we’d have a tough time finding goalies, but both (Lee and Nolan Hatch) played about the same and both played well.”

While the dream ended for the boys, the NDSS Golden Hawks girls chase for a KASSAA hockey title is still very much alive.

On Wednesday they topped their cross-county rival Ernestown Eagles 4-1 on home ice in their quarter-finals match-up.

That win advanced them to Monday’s semifinals, where they will take on La Salle. Puck drop is 2 p.m. on the SPC’s Goodyear rink. The winner of that game will advance to the Feb. 28 KASSAA championship game, where they will face the winner of the Holy Cross/Frontenac pairing. NDSS is looking to repeat as KASSAA champions. They finished the season in first overall after going 7-0-1.