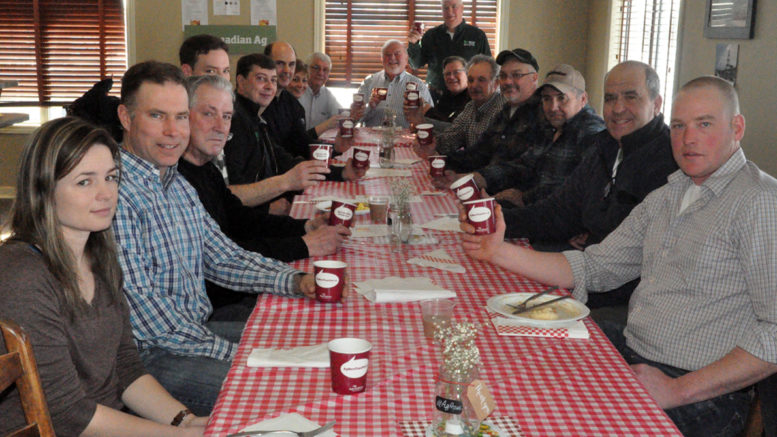 TCO Agromart hosted a group of municipal politicians, agricultural representatives, and bureaucrats Monday morning for an Agriculture Day breakfast. The event provided an opportunity to promote the sector and to see stakeholders share information with one another. Photo by Adam Bramburger.

About 20 stakeholders gathered at TCO Agromart in Selby Monday morning in advance of Tuesday’s Agriculture Day to sprout a new celebration from a time-honoured rural tradition.

Representatives from the Lennox and Addington Federation of Agriculture and several commodity groups sat down around the table with local politicians and economic developers to enjoy a home-cooked meal of locally sourced food, while talking about the state of affairs on local farms.

TCO Agromart owners Terry and Sandra O’Neill decided they wanted to do something to mark the occasion and bring more awareness to the value of agriculture in the lives of Canadians.

“I know everyone here is busy and we appreciate you coming out to have a chat and have some breakfast,” Terry O’Neill said. “It’s important that we do celebrate agriculture. It’s what we do. A lot of people in this room do that as well. It’s connected to the whole community.”

Sandra O’Neill added “I don’t think we’ve done enough of that” before encouraging those gathered to take some information she’d collected about the industry to distribute in their communities.

Stone Mills Reeve Eric Smith operates a cattle and cash crop farm in the Tamworth area. He’s keenly aware of the impact agriculture has on the local economies and the families involved in it.

“It’s big. It keeps people in the area, it’s a livelihood, and there’s no better place to grow your family,” he said. “It’s very important to show our municipality is involved in this and behind them 100 per cent.”

Asked about what issues the municipalities can help farmers with, Smith said awareness is key.

“Support local, that’s the big thing,” he said. “When you shop local and work local, it all works out in the end.”

Smith said he’s had discussions in Stone Mills about creating a new harvest event in September to celebrate agriculture’s contributions to the community and he was pleased to be able to plant seeds for that event with groups on hand for Monday’s breakfast.

L&A County Warden Bill Lowry stressed the value of teaching children and grandchildren the benefits of wholesome, real food that hasn’t been modified and agreed with Smith it’s important to support local farmers.

“I hope everyone gets the message that while it may cost a little more money, it also costs more to produce it. It’s a win-win for everybody,” he said.

The Loyalist Township mayor added there’s a lot of designated farmland in the county and he’d like to see farmers working as much of that land as possible for as long as possible.

Like Sandra O’Neill, Schermerhorn said he doesn’t think that appreciation is stated enough especially as many take for granted that someone is working to ensure food is safe to eat.

He thanked TCO Agromart for bringing people together to talk.

Leonard Austin, the president of the Lennox and Addington Federation of Agriculture agreed.

“The more people you talk to, the more you learn,” he said. “We need more of this for people to promote the industry. Farmers are struggling.”

In particular, Austin said the province’s introduction of a cap-and-trade carbon tax last year has been detrimental to agricultural producers.

“It’s really hurting farmers. It’s costing us a lot more money,” Austin said, adding farmers are paying more to run their machinery and struggling to recoup those costs through sales in a competitive market.

Increasing assessments on farmland by the Municipal Property Assessment Corporation, which saw the assessed value of farmland in Lennox and Addington up 97 per cent since 2012 have also been a concern, though the County was the first in the region last year to offer a ratio adjustment to help its agricultural sector.

Representatives from County’s economic development department and MP Mike Bossio’s office continued to meet with dairy farmers, cattlemen, and grain producers after breakfast Monday to learn more about their operations and the challenges they face.